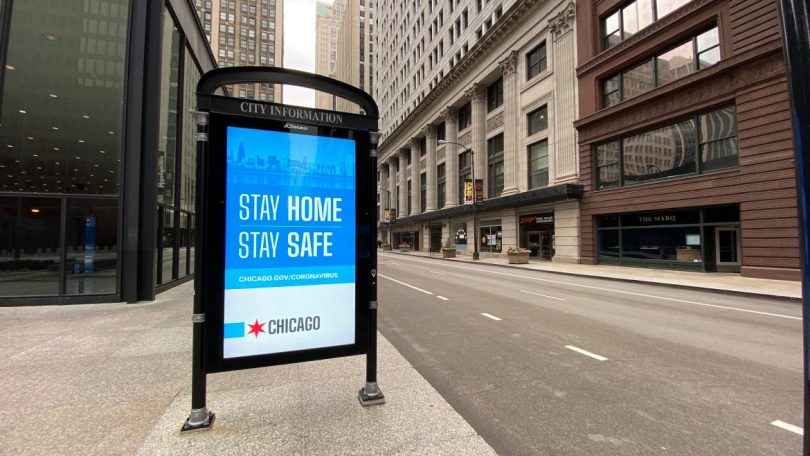 NAPERVILLE, Ill.—As pandemic-related restrictions tightened across parts of Illinois this week, small-business owners in this Chicagoland suburb girded themselves for another round of losses.

On Friday, restaurants and bars in four counties closed once more to dine-in service under mitigation measures announced by Gov. J.B. Pritzker because of rising Covid-19 cases in every region of Illinois. In Chicago, Mayor Lori Lightfoot instituted a 10 p.m. nightly curfew for nonessential businesses and prohibited bars without a retail food license from serving customers indoors.

Many businesses have endured multiple rounds of restrictions around the state, which are instituted whenever a region’s average Covid-19 positivity rate goes above an 8% threshold for three consecutive days. On Friday, Illinois health officials put half of the state’s 102 counties on a warning list because they triggered at least two state-set thresholds on indicators the state uses to determine where increased Covid-19 risk is occurring.

At Allegory, a restaurant in downtown Naperville, chef and owner Christopher Mason said previous shutdowns and dining restrictions have already put him out tens of thousands of dollars. He isn’t sure what the latest limitations, which again pause indoor service, will mean for the future of Allegory, which is about two years old.

“I have a few tables outside but nobody’s going to want to eat outside in a week or two,” Mr. Mason said. “Going into winter, I have no idea what to expect.”

On Friday, Illinois had 29,088 new Covid-19 cases in the last seven days, according to the Centers for Disease Control and Prevention. It ranked second behind Texas for U.S. states with the highest number of new cases in the past week.

At Little Luxuries, a home décor boutique a few doors down from Allegory on Naperville’s Main Street, owner Susan Finck said the tightening restrictions had her canceling orders for Christmas inventory because a drop in foot traffic at nearby restaurants means less business for her shop.

“We’re just being really intentional about what we’re buying and holding our breath until 2021,” Ms. Finck said.

The state-level mitigation measures focus mainly on bars and restaurants because public health officials say contact tracing of Covid-19 cases in Illinois shows that many interactions with those infected are happening at such establishments.

“When you look at the top three places that come up over and over, region to region statewide, it comes up as people’s workplace, it comes up as school, it comes up as restaurants and bars,” Dr. Ngozi Ezike, director of the Illinois Department of Public Health, said at a press conference earlier this week.

The restrictions have been devastating for the restaurant industry in Illinois, which saw 321,000 employees in the state furloughed or laid off at the height of the pandemic, according to a survey by the National Restaurant Association. More than half of the restaurant operators in the state say it is unlikely their businesses will be in operation six months from now if conditions don’t improve.

The restraints come amid a resurgence of the coronavirus pandemic across the Midwest, where five states on Friday were in the top 10 of U.S. states with the highest numbers of new Covid-19 cases in the previous seven days, according to the CDC.

In Illinois, heightened restrictions are currently in place in northwestern and southern Illinois, as well as in Will, Kankakee, DuPage and Kane counties—which all neighbor Cook County, where Chicago is located. Restraints are scheduled to tighten further in northwestern Illinois, which has been under increased restrictions since early October. Starting Sunday, restaurants and bars in the region will be limited to tables with parties of six or fewer, and social gatherings indoors and outdoors will be limited to a maximum of 10 guests.

In daily Covid-19 briefings this past week, Mr. Pritzker repeatedly warned that Covid-19 metrics in every part of the state were headed in the wrong direction, and said the resurgence was one public health officials had warned could come as the winter approached and flu season began.

“If you’re getting tired and you’ve let your guard down, now is the time to pick it back up,” he said at a Tuesday press conference in which he announced the restrictions affecting the Chicagoland suburbs.

In Chicago, officials said the average number of daily cases has risen by 54% in the past week, to over 640 a day.

Ms. Lightfoot on Thursday warned that if numbers continue to go up, she could tighten restrictions more, including going back to a shelter-in-place order. In addition to the curfew for nonessential businesses, Ms. Lightfoot noted that public health officials believe many infectious contacts are happening at social gatherings among families and friends, and asked Chicago residents to limit their gatherings to no more than six people.

“What none of us want is even further restrictions as we move into the holiday season, impacting Thanksgiving, Hanukkah and Christmas traditions, but that is exactly the path we are on right now,” Ms. Lightfoot said.

In Naperville, a city of roughly 147,000 about 30 miles west of Chicago, small-business owners worried about how long this round of restrictions might last. Many said business was down at least 50% compared with last year.

Signs of the pandemic were apparent at venues throughout the city’s downtown area: signs posted on doors reminding patrons they must be wearing a mask to enter; open air tents to shade the temporary outdoor seating at The Lantern, a local tavern; a clear partition in front of the cash registers at Anderson’s Bookshop to separate clerks and customers.

Ginny Wehrli-Hemmeter, Anderson’s event coordinator, said the restrictions will slow business at the independent book store, which has been around since 1875 and survived the 1918 flu pandemic.

“It’s the right call to shut down in-person dining,” Ms. Wehrli-Hemmeter said, though she empathized with local bar and restaurant owners losing business. “What hurts one hurts everybody.”

At Tapville Social, a bar and eatery where the libations are self-pour via digital tap wall, executive chef Jacob Smith said that after he heard dine-in service in the county was being prohibited again, he called Tapville’s beverage suppliers to come retrieve the unopened alcohol orders they had just dropped off.

“Our tap wall is our big pull,” he said. “The biggest thing that hurts us is not having people have access to the tap wall.”

At Allegory, Mr. Mason said he can only hope people abide by the restrictions and that the number of Covid-19 cases starts to drop quickly.

“I’m really hoping that everyone does their part,” he said. “Honestly, everyone just needs to be good neighbors and wear their damn masks.”