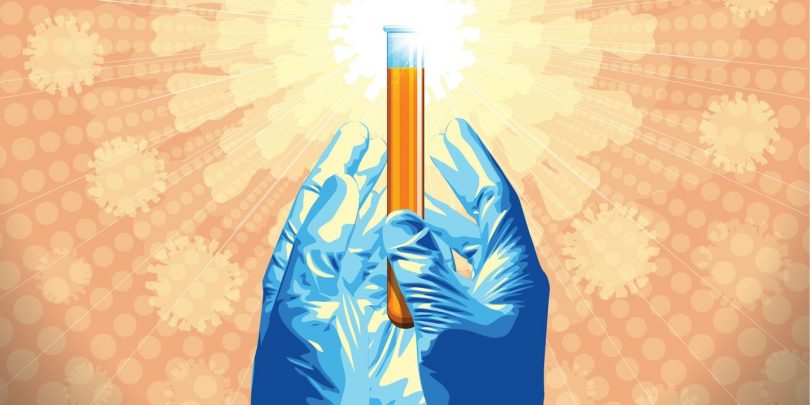 The Covid-19 pandemic is turning some fierce drug-industry foes into the best of frenemies.

The pharmaceutical giant standing at the center of this team of rivals is GlaxoSmithKline GSK 2.50% PLC, the world’s largest vaccine maker by sales. The British company is jointly developing a Covid-19 antibody drug with a San Francisco upstart, offering rivals a proprietary ingredient that is designed to boost a vaccine’s power and planning to share research study results.

“We felt this very unusual situation required something that GSK hadn’t done before, and something we hadn’t seen in the industry before either,” says Roger Connor, president of Glaxo’s vaccines business.

What makes Glaxo’s collaboration so unusual is that competition typically defines the relationship among drugmakers. Company researchers race to be first to bring a new kind of therapy to market or work on treatments that can outdo older medicines, while marketers roll out campaigns designed to boost sales at the expense of rivals.

In the age of Covid-19, old adversaries are uniting around a common enemy: the new coronavirus. Their nascent partnership is now visible in everything from trials to research to manufacturing. Glaxo and eight other pharmaceutical firms even took the rare step of issuing a joint pledge last month to seek regulatory approvals for their vaccines only after proving their safety and effectiveness in large, final-stage clinical trials.

The most common area of cooperation thus far is manufacturing. Some longtime rivals are striking deals to stretch their capacity to meet anticipated demand. Roche Holding AG is helping manufacture an antiviral drug in development by rival Regeneron. Amgen Inc. will help make Eli Lilly & Co.’s antiviral drugs if the treatments are authorized by regulators. Pfizer has dedicated manufacturing capacity to turning out doses of remdesivir, an antiviral made by rival Gilead Sciences Inc.

The camaraderie also extends to the traditionally cutthroat realm of research. Regeneron Pharmaceuticals Inc. scientists contributed to research on a vaccine in development by BioNTech SE and Pfizer Inc., and were co-authors on a paper this summer detailing the results. In another rare move, Merck & Co.’s research and development chief called his Glaxo counterpartment in April to pass along a tip that one of Glaxo’s molecules showed promise in Merck’s Covid-19 lab tests.

Glaxo’s most prominent contribution to this new era of collaboration is its decision to share a proprietary vaccine component known as an adjuvant—an ingredient that helps boost a vaccine’s protective power by rousing the body’s immune response. Glaxo now has agreements to supply that ingredient to four vaccine developers, including French drugmaker Sanofi SA, and stands ready to produce one billion doses of its adjuvant next year. It normally produces tens of millions annually.

Some analysts say the company could enjoy benefits from selling its adjuvant for Covid-19 shots without impairing its lucrative vaccine business. “There is political capital to be gained from what they’re doing, and there may be some financial returns to be had as well,” says Andrew Baum, a Citigroup Inc. analyst who follows health care.

Glaxo says it doesn’t expect to profit from its Covid-19 vaccine collaborations during the pandemic, and it will invest any short-term profits in coronavirus research and pandemic preparedness.

“The adjuvant can be equally important—maybe crucial—to the vaccine being effective,” says Hal Barron, Glaxo’s chief scientific officer and president of R&D. “We thought that’s where our unique opportunity to make a difference could be.

The Team of Rivals

The alliance among drugmakers took hold in mid March as Glaxo closed labs amid a sharp uptick in Covid-19 infections around the world. Suddenly, Dr. Barron had to figure out how to run a global R&D organization under lockdown. He and his team debated which workers should be deemed essential and continue to work on-site, and which clinical trials should be paused and which ones to continue.

“I’ve never been in a situation like this,” he says. “I wasn’t sure what the right thing to do was.”

Dr. Barron called Mathai Mammen, a friend who heads drug research and development at Johnson & Johnson. They compared notes on how to decide which drug studies to pause and which scientists were essential enough to continue coming in to the office. Toward the end of the call, Dr. Mammen invited Dr. Barron to join a larger group of R&D chiefs to share information about the virus and approaches to drug development, Dr. Barron says.

Glaxo had a potentially critical role to play in the response to Covid-19, as one of the world’s largest vaccine sellers. Sales of its shots totaled about $9.4 billion last year, the most of any of the top four vaccine-makers globally. The company also had a history of rallying its employees to respond to pandemics. In the years leading up to the 2009 swine flu pandemic, it spent $3.2 billion on R&D, acquisitions and manufacturing in preparation for a flu pandemic.

On Sunday, March 8, many of the biggest drugmakers convened for a group call. Aside from Drs. Barron and Mammen, participants included the heads of research from AstraZeneca PLC, Bristol-Myers Squibb Co. and Novartis AG , recalls Andrew Plump, president of R&D at Takeda Pharmaceutical Co. , who was also on the call.

“Things were happening so, so quickly, with organizations closing down and quarantining, and beginning work-from-home policies,” recalls Dr. Plump. “We were all scrambling. And there was also an immense amount of interest in all of us stepping up and trying to provide solutions.”

By the end of that call, the research bosses resolved to keep the virtual meetings going and to open up the group to other companies and, occasionally, government officials such as Francis Collins, director of the National Institutes of Health, and officials from Operation Warp Speed, a $10 billion U.S. government initiative to speed the development of drugs and vaccines for Covid-19. For months, they met regularly using videoconferencing software.

Concerns about running afoul of antitrust regulations were alleviated when federal regulators made it clear that research cooperation in the fight against Covid-19 was permissible. The Justice Department and Federal Trade Commission issued a joint statement on March 24 stating “there are many ways firms, including competitors, can engage in procompetitive collaboration that does not violate the antitrust laws.”

With that statement, “we felt that we had enough cover to do what we needed to do,” says Dr. Plump.

The group established a mandate to tackle short-term problems, such as developing reliable laboratory tests to screen the thousands of drug molecules the companies had stored in their libraries against the coronavirus. They also agreed to dramatically increase the speed at which they shared clinical trial data with one another, posting the anonymized data within one week of receiving results from their Covid-19 studies. Outside researchers are allowed to scrutinize the data to learn more about the virus.

Glaxo began reaching partnerships on its own, too. One developed from a call Dr. Barron received in mid March from his friend George Scangos, chief executive of a small San Francisco drug-developer with a focus on infectious diseases.

Dr. Scangos asked whether Glaxo would be interested in collaborating with his company, Vir Biotechnology Inc., on a Covid-19 monoclonal antibody drug that is engineered to mimic the natural antibodies the immune system makes to fight the virus.

“If we’re going to do this, we need to go fast, because every day matters,” Dr. Scangos recalls saying.

Usually, such deals might take several months to a year to hammer out. Dr. Scangos and Dr. Barron set a goal of signing an agreement within three weeks.

The companies announced a deal on April 6, within 18 days of starting negotiations. Under the terms, Glaxo would purchase a $250 million stake in Vir at $37.73 a share, a 41% premium to the company’s average share price over the previous three months. Clinical trials are under way and the companies expect potential authorization for the drug in the first half of 2021.

Glaxo was even more aggressive in its pursuit of vaccine makers that wanted access to its adjuvant, the ingredient that boosts the immune response to a vaccine.

One was Sanofi, which said in February it was developing a Covid-19 vaccine candidate. Mr. Connor called David Loew, the head of Sanofi’s vaccine unit, to see if the French drugmaker would be interested in pairing its vaccine with Glaxo’s adjuvant.

Executives say the company settled on its adjuvant strategy as a way to contribute to the Covid-19 response without losing focus on its pre-pandemic mission of reinvigorating the company’s product pipeline or disrupting its existing vaccine manufacturing supply chain. The company’s senior management had been overhauled a few years earlier amid shareholder disillusionment over the company’s mixed record in launching new blockbuster drugs. Its adjuvant was already proven to work with other vaccines, reducing its risk, and would be less of a manufacturing logistical challenge.

During pandemics, adjuvants are especially valuable because they can increase the potency of vaccines, allowing companies to produce more doses from each batch it manufactures. Glaxo’s adjuvant, called AS03, is a combination of vitamin E and liver oil taken from sharks. The company used it to enhance the effectiveness of its vaccine for the H1N1 pandemic in 2009.

To find partners for its adjuvant, Glaxo launched an internal project led by a team of Glaxo drug hunters who looked for anyone working on a key vaccine component—a protein known as an antigen—that would cause a person’s immune system to build up defenses against the new coronavirus. The hope was that people who got the antigen through vaccination would develop antibodies and perhaps other defenses that could protect against Covid-19.

Glaxo’s drug hunters mapped every antigen in the works for Covid-19 using squares on a PowerPoint slide. Every square contained the name of a potential partner, details about the vaccine and a contact person who had spoken with Glaxo. The slide resembled a digital quilt, with some 100 squares.

Some in the quilt approached Glaxo seeking help. Glaxo reached out to others. The campaign was “quite unusual for us,” says Mr. Connor. “Going out and offering it to the world was something quite, quite different.”

On that first call with Sanofi, Mr. Connor said he remembers telling Mr. Loew: “‘There is an opportunity here for us to do something together, which means that we could ultimately go faster for the world and make a difference to the common enemy, which is the virus itself.’”

Within 36 hours, they agreed to create a joint task force that would start exchanging information and planning how to make the partnership work while the companies worked out a formal agreement. “We knew that the world was waiting,” Mr. Connor says.

Initial meetings, held by videoconference among employees across multiple time zones, were “slightly awkward” as the rivals turned teammates felt each other out, said Thomas Triomphe, Sanofi’s executive vice president for vaccines.

The companies hope to have results from early-stage studies in late November or early December, Mr. Triomphe said. They aim to start a 30,000-person study by the end of the year and to have the vaccine approved in the first half of 2021, he says.

“When you’re facing a public-health crisis there is no team with a blue T-shirt and a team with an orange T-shirt. Very quickly, there was only one team,” Mr. Triomphe said.