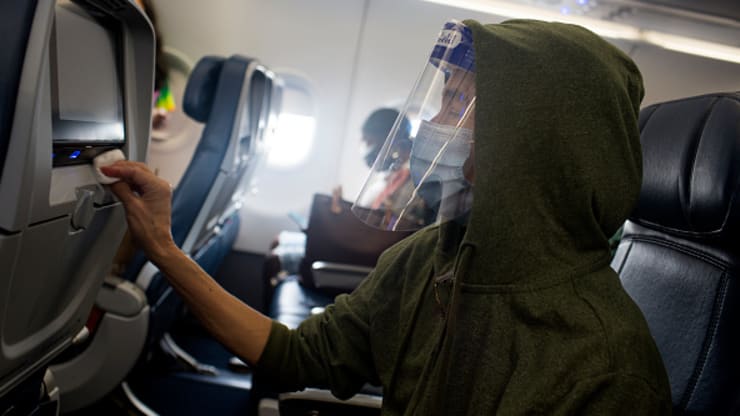 New York City Mayor Bill de Blasio told residents on Tuesday to avoid traveling out of state during the holidays as the city responds to the “real threat” of a second wave of coronavirus infections.

For those who decide to travel, he urged them to get tested and to adhere to the state’s travel advisory that requires travelers arriving in New York from a majority of U.S. states to quarantine for 14 days.

“I hate to say it, but I have to urge all New Yorkers: Do not travel out of state for the holidays,” de Blasio said during a press briefing. He said the recommendation was based on advice he received from the city’s health-care leadership.

“Realize that by doing that, unfortunately, you could be putting yourself and your family in danger and also the risk of bringing the disease back here,” he said.

Passengers who arrive at New York City-area airports will be encouraged to get tested for Covid-19 immediately, de Blasio said, adding that physical testing sites will operate at LaGuardia Airport and John F. Kennedy International Airport.

“We want to make it easy and clear that anyone coming off a plane should immediately get tested as well,” de Blasio said.

The mayor also pushed for the federal government to mandate that travelers nationwide test negative for Covid-19 before boarding both international and domestic planes.

“It’s not about the airline industry, it’s about your health, your family’s health, the city’s health and safety. The country, that’s what we should be thinking about,” he said.

Coronavirus cases across the U.S. have surged in recent weeks, leading to a rise in hospitalizations. The nation is now reporting nearly 70,000 cases daily — a record that shows no sign of letting up as fall holidays Halloween and Thanksgiving approach.

New York City has been responding to an increase of coronavirus cases in “red zones” that have reported higher positivity rates, or the total percentage of tests that are positive, compared with other parts of the state, especially in the Brooklyn and Queens boroughs.

The city’s seven-day positivity rate is now roughly 1.6%, a number that is “fairly stable,” de Blasio said. The weekly average of daily Covid-19 cases is at 528, only slightly below a threshold of 550, he said.

“We have a real threat of a second wave here in New York City, and we’ve been fighting it back, but we can’t take it lightly,” de Blasio said.