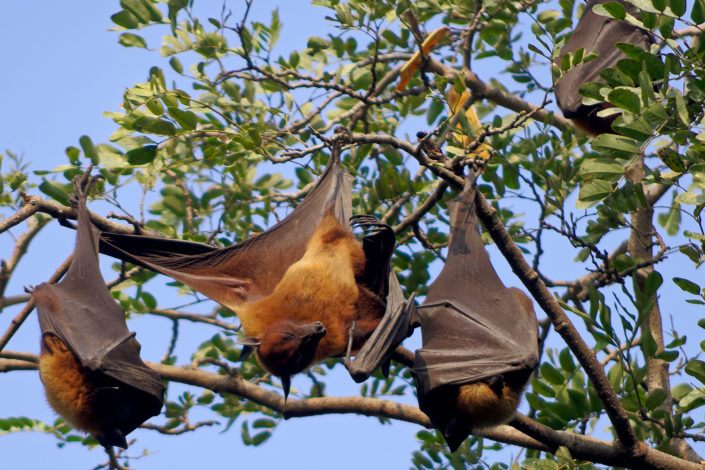 Stanford epidemiologist Stephen Luby discusses surprising results of a recent study on Nipah virus, a disease with no vaccine and a mortality rate of up to 70 percent.

A little known virus may have a lot to teach us about dealing with COVID-19. Discovered 20 years ago, Nipah virus can spread from bats or pigs to humans. Found only in South and South East Asia so far, it kills nearly three-quarters of the people it infects. There is no vaccine for it and no cure, and it has many strains capable of spreading from person to person, increasing the chances of a strain emerging with the ability to rapidly spread beyond the region.

Stephen Luby, a professor of infectious diseases at Stanford University, has done extensive research on Nipah and the bats that spread it in Bangladesh through their contamination of fresh date palm sap, a popular drink in the country. He co-authored a recent study, published in Proceedings of the National Academy of Sciences, examining the role of Pteropus medius bats and human-caused environmental factors in Nipah’s spread. Anthony Fauci, director of the National Institute of Allergy and Infectious Diseases, edited the study. Below, Luby discusses how the paper’s findings relate to SARS-CoV-2, the virus that causes COVID-19, and other viruses that move from animals to humans.

What did you learn about how the Nipah virus behaves in these bats?

The study finds there are multiyear cycles of transmission across the bat population that likely contribute to Nipah virus shedding and human risk. We have known for many years that in Bangladesh there is a clear seasonality to human Nipah infections. They occur during the winter. We also observe that there are some years where we see many spillovers from the bat population into humans and other years where we see very few. We do not have a good understanding of what causes this year-to-year variation. The new finding that transmission in bats follows a cycle that runs over multiple years suggests that variations in bat shedding of the virus is likely one of the reasons why we see this marked year-to-year variation.

Also, the data are most consistent with the idea that Nipah virus infection in bats can recrudesce. This means that if a bat is infected, its immune response can control the infection so the bat does not shed, but years later immunity wanes and the virus can again emerge and be shed. This is interesting from the perspective of wildlife transmission models because it means that you do not need to have newly infected animals enter the population in order to reintroduce the virus.

It shows how human changes to the environment, such as logging national forests, have increased the interaction between humans and bats. The telemetry data showed that the Pteropus medius bats seem to prefer human-dominated landscapes, presumably because of the availability of food sources, such as the date palm sap trees. This suggests the co-location of the bats and people and so illustrates the ongoing risk of occasional spillover.

How are the strategies for preserving bats and protecting humans outlined in the new study relevant to other species and/or viruses, such as SARS-CoV-2?

Human encroachment on natural ecosystems generates increased human exposure to novel agents. So, risk of spillovers and even pandemics is a recurring theme in the epidemiology of emerging infections. If we can preserve natural habitats and natural food sources, then bats and other wild animals will often prefer to leave human settlements alone. As we destroy these natural habitats, we increase risk of contact. Increasing contact increases the risk of spillover.

What major lesson can we learn from Nipah that might help us deal with COVID-19?

All too often it seems to me that people think of these bat-borne viruses as exotic diseases that are far away. The COVID-19 pandemic illustrates, however, that local spillover of novel viruses can affect the whole world. One lesson we should draw from SARS-CoV-2 is the importance of continued engagement with global partners in identifying and reducing the risk of spillover. Imagine, for example, after two global pandemics from coronaviruses – SARS in 2002 and MERS in 2012 – that China closed all live animal markets. This past year might have turned out quite differently. The entire global community, including taxpayers in high-income countries, have an interest in investing in surveillance and efforts to reduce the risk of spillovers.

Are there any effective ways to reduce the likelihood of Nipah virus spreading from bats to people?

The study suggests prioritizing approaches that prevent bat contact with date palm sap, the overwhelming pathway of transmission of Nipah virus from bats to people. We have conducted research where we have encouraged date palm sap collectors to use bamboo skirts to prevent bat access to date palm sap that they intend to sell fresh. This allows people to continue to enjoy fresh date palm sap, while eliminating the risk of Nipah transmission. Our research demonstrates that the skirts are effective in preventing bat contact with the sap, and that many people prefer drinking sap that was collected safely.

What about the idea in this paper of surveillance for [Nipah virus] and antibodies in bats and people where they are in close contact to help determine spillover risk and help us better target interventions?

This is an important idea. Some viruses like Nipah virus are generalists – they can affect a wide array of species. We know that Nipah virus can spill over into pigs, into horses and likely into other livestock. The coronaviruses are another family of viruses that show a remarkable ability to infect a wide array of species. We also know that Nipah is only one of many thousands of viruses that these bats carry. Better understanding viral circulation in bats while simultaneously looking for spillover in human populations can improve our understanding of the conditions that predispose these rare events.