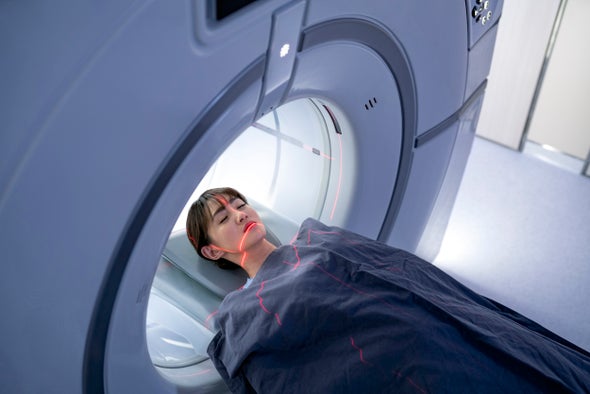 Bedside imaging holds vast potential as a diagnostic tool, especially during the pandemic

Among other things, the pandemic of 2020 has emphatically reinforced the need for both patients and their doctors to get reliable medical results quickly. The advent of rapid antigen testing for COVID-19, for example, is changing the way we think about how we approach the disease and prevent its spread.

But what if we could think bigger? What if one of the most useful diagnostic tools in health care could be wheeled to your hospital room bedside, rather than requiring you to be physically moved to another wing—or even another building entirely—in order to make use of it?

For decades, we’ve used magnetic resonance imaging (MRI) to create detailed anatomical images of organs and structures inside the body. Now, improvements in radiology imaging technique have enabled the industry to build smaller low-magnetic-field MRIs and move them into the clinical environment—basically, the first portable versions of this equipment. For emergency physicians like me, bedside imaging could open entire fields of possibility.

More research needs to be done on this innovative device, but the early results are encouraging—enough that doctors and hospitals may begin imagining just how they would use a portable MRI — and a few have already put such units into limited use, as they learn more about their capabilities.

Here’s a scenario that fits our times: You become ill with COVID and begin experiencing neurologic symptoms (such as headache, slurred speech or weakness) that are consistent with a possible stroke, and you wind up in the ER. But when the nurse and physician enter your room to begin assessing you, they don’t come alone. Instead, they bring with them a point-of-care (POC) MRI, just 57 inches tall.

The doctor conducts a brief exam—but instead of then calling the radiology suite to try to get you scheduled for an MRI study, on a machine often located in the basement or another part of the hospital, this mini-MRI stands ready at the bedside. Imaging is performed right there; results start appearing within minutes. Quickly, we could know if you might require a clot-busting drug like tissue plasminogen activator (tPA) for stroke, or if there was unusual swelling in the brain.

Perhaps an ill newborn is in the intensive care unit (ICU), on monitors, connected to wires, and with a feeding tube in place. Imaging is needed, but “it can be a huge production to get a neonate down to MRI,” says Christine Glastonbury, interim chief of neuroradiology at the University of California, San Francisco. “So, for this sort of thing, a portable MRI done right in the neonatal unit is magical.”

The machine, called Swoop, is a product of Hyperfine. It can be plugged into a standard electrical wall outlet and then controlled with a wireless tablet like an Apple iPad. The chief medical officer for Hyperfine, Khan Siddiqui, tells me that it takes about 30 minutes of training for new users to learn to operate and navigate the system. (I’ve spent more time learning how to draw blood.)

The potential upside to this point-of-care technology for the brain is enormous. An entire diffusion-weighted MRI sequence for stroke, for example, can be completed in nine to 11 minutes, Siddiqui says. And the resolution and level of anatomic detail that we can see on traditional MRI scanners is nothing short of extraordinary. If Swoop can approach that kind of detail, which is not yet clear, it will constitute a major breakthrough.

“We’ve flipped the concept from having to get patients to the MRI to bringing the MRI to the patients,” says Yale’s division chief of neurocritical care and emergency neurology, Kevin Sheth, who is an academic partner collaborating with Hyperfine.

As I write this, a friend’s daughter is in a hospital ICU because of COVID-19. With cardiac, lung and abdominal issues, her blood pressure is too unstable for her to be safely transported out of the ICU to a CT scan several floors away. In circumstances such as hers, a device like Swoop could be lifesaving.

Hyperfine’s mission, Siddiqui tells me, is to “democratize health care by making medical imaging accessible around the world.” With some 4.7 billion people lacking access to any form of medical imaging, that’s perhaps a tall ambition. Still, with the devices “being portable and cheaper, you should be able to ship them to places where you can really change medicine in other countries,” says Glastonbury at UCSF. “I love this sort of genius invention.”

As physicians, we sometimes wait hours to get imaging studies scheduled, and we worry about our patients’ conditions worsening during that down time. In the world of portable MRIs, we would have immediate answers, and patients wouldn’t need to leave their beds in order for us to get them. Beyond that, MRI technology is much safer than CT scans because it doesn’t throw off ionizing radiation, which has the potential to cause cancer years down the road.

There may be cost savings, too. “Sometimes patients are admitted overnight for MRIs,” says Susan Lewis, an emergency physician at Scripps Mercy Hospital. “This could eliminate the cost of a hospital admission. We could get MRIs faster, cheaper and safely right in the [emergency] department.”

Traditional MRI machines are vastly more expensive, and they have powerful, heavy magnets that need supercooling with liquid nitrogen or helium, requiring that they be placed in bunker-style, copper-shielded rooms. They consume some 35 times more energy than a device like Swoop. Conventional MRIs are also very noisy for patients, the narrow scanning tubes can be prohibitive for some with claustrophobia (though open MRIs are in use too), and the strong magnetic field generated means some patients with passive metal in their bodies—rods, screws, plates, bullets, etc.—cannot undergo scans at all. Now they can, according to Siddiqui.

But there’s always a tradeoff. For one thing, the quality of images produced by the Swoop system isn’t perfect. Although they’ve improved significantly over the past two years, Sheth says, “they still need to get much, much better—but we are just at the beginning of this journey.” Deep learning (AI technology) offers the potential to optimize images as well as to shorten the duration of scanning.

Without question, the significance of a device like this is going to be related to image quality. As a physician, though, what I really want to know at the bedside is whether or not disease is present. If the Swoop image is of a somewhat lower resolution, for example, could I still identify a stroke? This is a base-level consideration.

In a prospective study published in JAMA Neurology in September, performed in critically ill patients at Yale New Haven Hospital’s Neuroscience ICU, Sheth and his team found that the portable MRI machine identified important neurologic findings like stroke, brain tumor and traumatic brain injury in 29 out of 30 patients. An abstract published in Neurology, meanwhile, looked at the POC MRI scanner’s use in stroke and brain bleeds and concluded that the low-field MRI system appeared safe and viable in a complex ICU environment.

A second abstract conducted on 36 stroke patients found a “pathologic lesion” on every exam, while sensitivity for any type of brain bleed was 89 percent. So, it missed about 1 in 10, although we don’t know whether these were significant. The authors concluded that more work is needed to evaluate this approach across a range of different brain bleed characteristics.

Hyperfine only recently received FDA clearance in August to use Swoop for brain imaging across all age groups. According to the company, at least 25 institutions already have these scanners, including Massachusetts General Hospital and Yale New Haven Hospital. COVID-19-related demand, along with advantages such as the ability to clean the machine in minutes (as opposed to sterilizing an MRI suite), has led to the company expediting its manufacturing, Siddiqui says. The machines are being used in neuro-ICUs, pediatric ICUs, outpatient neurology clinics and stroke rehabilitation centers, among others. The Gates Foundation recently purchased 20 scanners for screening purposes to look at infant asphyxia and brain development in malnourished children.

Hyperfine’s innovation with Swoop comes from its small size, portability and some proprietary technology. While Swoop has much going for it, evidence-based research in various settings is still needed to determine its clinical yield and performance. (Half a dozen papers are in review, Siddiqui says.) A body of research exists from as far back as the 1980s on the use of low-field scanners that demonstrates promising results with such technology, but “the last 20 years of development of MR sequences – and the techniques to improve image quality at 1.5 Tesla (high field) – had never happened at low field,” Siddiqui says. “This is where we have to catch up with the research.” A resurgence of interest in low-field MRI, using small, cost-effective, easily installed scanners, has shown the feasibility of its use intraoperatively, in the neonatal ICU, and in orthopedic offices using “extremity scanners” to image arms and legs.

What will need to become clearer in the clinical realm are things like who performs the scans, and for which patients and conditions the technology should be used. How do the images obtained here compare in quality to those from conventional MRI? Does the machine replace CT or high-field MRI, or do we use it more for screening and dedicated purposes? How well does it diagnose conditions like strokes, different types of brain bleeds or tumors? And who maintains POC MRI quality control?

Many questions remain. Then again, the mini-MRI on wheels has just left the starting gate. “We are doing the work, and others will do the research too,” Sheth said.

Let’s see how Swoop goes. I can tell you that my colleagues and I would love to have one (or two) of these roll through our ER doors during this pandemic. In fact, we have joked before that we wished we could just MRI everybody that walked in, so we would know what was wrong with them. That wish may be closer to coming true than we think.