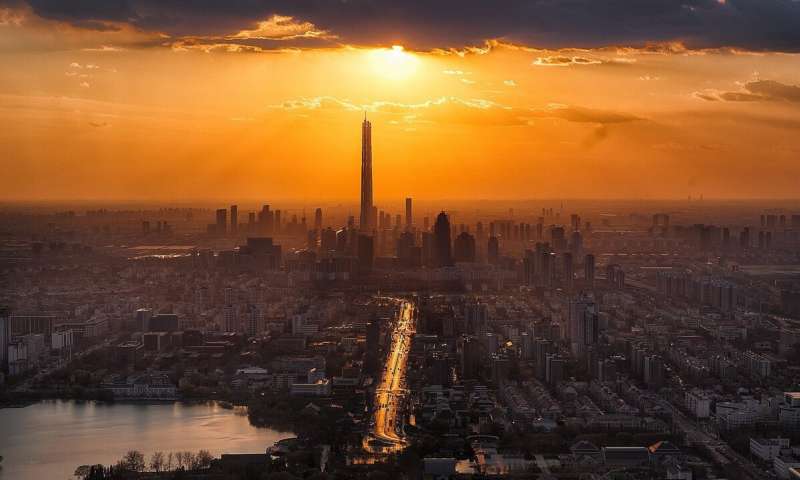 In April 2020, as Delaware and states across the country adopted social distancing measures to deal with the public health crisis caused by the coronavirus (COVID-19), University of Delaware professor Cristina Archer recalled having a bunch of people tell her that the skies looked bluer than usual.

This simple observation led Archer to investigate an important and complicated research question: Did the social distancing measures adopted in the United States, and the resulting lower number of people using various means of transportation, cause an improvement in air quality across the country?

Unfortunately, unlike those observed clear, blue skies, the answer is a bit murky.

“Just because people stayed at home and just because they drove less, it didn’t necessarily mean that the air quality was better,” said Archer, professor in the School of Marine Science and Policy in UD’s College of Earth, Ocean and Environment (CEOE). “By some parameters the air quality was better, but by some other parameters, it was not. And it actually got worse in numerous places.”

The results of the study were recently published in the Bulletin of Atmospheric Science and Technology. The study was led by researchers at UD, Penn State and Columbia University.

From UD, coauthors include doctoral students Maryam Golbazi and Nicolas Al Fahel. Other coauthors on the study are Guido Cervone, professor of geography, and meteorology and atmospheric science at Penn State, and Carolynne Hultquist, a former doctoral student in Cervone’s laboratory and now a postdoctoral researcher at the Earth Institute of Columbia University.

To assess air quality, Archer focused on nitrogen dioxide and fine particulate matter, specifically PM2.5. The two pollutants are federally regulated and are both primary and secondary pollutants, meaning they can be emitted either directly into the atmosphere or indirectly from chemical reactions.

“Nitrogen dioxide is a good indicator of traffic,” said Archer. “We had evidence already from some preliminary papers in China that nitrogen dioxide had dropped significantly over the areas of China where a lockdown was in place.”

The researchers compared measurements of these two pollutants in April 2020 against those in April over the five previous years—from 2015-2019.

They chose April because pretty much every state had some kind of social distancing measure in place by April 1, which led to changes in lifestyle.

“Even in the states where there were not that many infections, there was a change in the mobility of people,” said Archer.

To quantify social distancing, the researchers used a mobility index calculated and distributed by Descartes Labs, a predictive intelligence company that compiles large data sets from around the world. Their algorithms accounted for people’s maximum distance traveled in a day by tracing the user’s location multiple times a day while using selected apps on their smartphones.

“One of the big uncertainties with trying to forecast future air quality is how the atmosphere will respond to lower emissions of certain pollutants,” said Cervone. “COVID-19 gave us some insights into the effects of lower emission rates on the environment. We had this unique situation that showed us what happens if people stop driving.”

Overall, they found that there were large, statistically significant decreases of nitrogen dioxide at 65% of the monitoring sites, with the NASA OMI satellite data showing an average drop in 2020 by 13% over the entire country when compared to the mean of the previous five years.

The particulate matter concentrations, however, were not significantly lower in 2020 than in the past five years. They were also more likely to be higher than lower in April 2020 when compared to the previous five years.

This is significant because while nitrogen dioxide is a precursor to other pollutants, such as tropospheric ozone formation and the formation of nitric acid in acid rain, which will eventually lead to negative impacts on human health, particulate matter is dangerous on its own.

Fine particulate matter is an air pollutant that consists of microscopic particles that pose a great risk to human health because they can directly penetrate into human lungs, the bloodstream and even the heart.

Archer said that they are working on a hypothesis as to why particulate matter might have been elevated while nitrogen dioxide decreased.

One possible explanation is that particulate matter is emitted by diesel vehicles, which handle most of the nation’s deliveries. While traffic with regard to gasoline-fueled passenger vehicles was down in April, the diesel trucks and the regular freight traffic didn’t change significantly.

In addition, more particulate matter is emitted when individuals use heat to warm their personal homes when compared to office spaces.

“In the office, you’re very unlikely to have a stove or a fireplace, whereas at home you are,” said Archer. “And in April 2020, even though in many states it’s already the warm season, in the Northeast, we had an incredibly cold April. So particulate matter is probably responding to those residential heating changes as well as the normality or even above normality of freight traffic and diesel vehicles.”

Archer said the next steps in the research are to perform more studies to confirm their hypothesis. In addition, the work will be presented at the upcoming virtual American Geophysical Union fall meeting.

As for those bright, sunny days observed in Delaware at the start of the shutdown in April, Archer said that it was probably just a matter of perception.

“People were saying to me, ‘It seems to me the skies are bluer,’ but they were not,” she said. “It was probably a coincidence that there were some sunny and clear days. In Delaware, actually, our skies were more polluted in April 2020 because of higher-than-average particulate matter concentrations.”