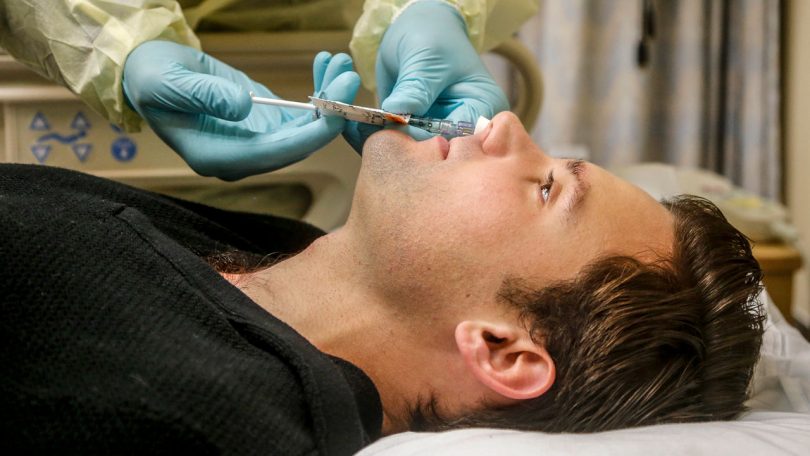 In the early days of the COVID-19 pandemic, tens of thousands of young volunteers offered to risk their health by letting scientists intentionally infect them with the pandemic coronavirus, hoping to speed the hunt for a vaccine or treatment. Several research groups announced plans to run these so-called human challenge trials, even as some scientists questioned whether they could be conducted ethically.

Now, with the recent news that conventional human trials have produced at least two very promising vaccines, scientists are debating whether planned challenge trials are still needed. In the United States, one nascent effort appears to be on hold. In the United Kingdom, however, researchers say they are moving ahead. “There are still many strong arguments for pursuing” human challenge trials, says Christopher Chiu, an immunologist at Imperial College in London and lead researcher for the proposed U.K. trial.

In traditional human trials, researchers give volunteers either a vaccine or a placebo, then wait months or longer for enough cases to emerge to gather statistically rigorous results. Challenge trials can move faster by first vaccinating volunteers and then intentionally exposing them to SARS-CoV-2 in a controlled setting. Researchers would then closely monitor the volunteers for days or weeks.

But challenge trials are also rife with ethical concerns. For example, because no reliable treatments for severe COVID-19 have emerged, people who volunteer to test a vaccine could be putting their lives on the line if they get sick.

Medical authorities around the world have adopted a cautious approach. Even 1 year after the outbreak began, no such trial is underway. Meanwhile, 11 vaccines have entered the final phase of conventional human testing, with promising results already emerging: Pfizer and BioNTech announced on 18 November that their vaccine is 95% effective, and Moderna announced similar preliminary results 2 days earlier.

Proponents say challenge experiments could still advance science and save lives. They could be used to compare the effectiveness of different vaccines, for instance, and help quickly screen the most promising second-generation candidates from the dozens now in the works. Challenge studies could also help answer unknowns, such as what immunological markers indicate someone is protected from the virus, and whether vaccines block infection entirely or simply prevent people from getting sick. That’s important, because if a vaccinated person can still transmit the virus, people who aren’t vaccinated would be at risk.

It’s hard to use large-scale field trials to figure out whether a vaccinated person still sheds the virus, says Marc Lipsitch, a Harvard University epidemiologist who has advocated for COVID-19 challenge trials. “It’s almost prohibitively expensive because in a 30,000-person trial you have to test 30,000 people a week for a long period of time,” he says.

The initiative Chiu heads, the Human Challenge Consortium, is the closest to starting. Backed by £33 million from the U.K. government, Chiu is preparing to submit the test plan to government regulators in late November. If approved, scientists could infect the first young adult volunteers in January 2021. The preliminary studies, involving up to 100 volunteers ages 18 to 30, would determine the lowest viral dose needed to cause an infection. Once researchers have a standard dose, they could move forward with head-to-head comparisons of different vaccine candidates. Although the experiment won’t replace large-scale traditional efficacy trials, it could highlight which vaccines warrant further investment, Chiu says.

Chiu is comfortable with intentionally infecting people with SARS-CoV-2 because there is growing evidence that young adults have a low risk of serious illness. He consulted with researchers at King’s College London who help manage an app tracking COVID-19 symptoms for more than 4 million people. Among 650 young adults with confirmed cases, nine in 10 had no symptoms after 3 weeks, whereas the symptoms of a few “outliers” resolved after a few months, Chiu says.

In the United States, however, the recent vaccine results have put a damper on enthusiasm for human challenge trials. A month ago, virologist Matthew Memoli put the final touches on plans for a challenge trial at the National Institute of Allergy and Infectious Diseases (NIAID), where he heads the Clinical Studies Unit at the Laboratory of Infectious Diseases. Now, he says, “That program is in limbo.”

After the first news of the vaccine success, Memoli heard NIAID Director Anthony Fauci and the head of the National Institutes of Health, Francis Collins, make remarks at an online meeting with the Bill & Melinda Gates Foundation that suggested the challenge experiment might not be necessary. Collins confirmed the exchange through a spokesperson.

That’s welcome news to some, who fear that challenge trials present risks of serious complications and warn that the long-term impacts of SARS-CoV-2 infections are uncertain. Wilbur Chen, an infectious disease expert at the University of Maryland, Baltimore, who has conducted challenge experiments to study intestinal diseases including cholera, says such trials are far riskier for COVID-19. Antibiotics could effectively treat his volunteers if they got sick, Chen says, but “I don’t think there’s a good rescue therapy right now” for COVID-19. He co-wrote a recent article in the Proceedings of the National Academy of Sciences arguing that challenge experiments would be unethical at this point.

Others, however, say the apparent success of some vaccines could strengthen the case for using challenge trials to test other vaccines. Once viable vaccines are available, it’s harder to justify continuing to use a placebo in traditional trials involving thousands of people, says Rutgers University, New Brunswick, bioethicist Nir Eyal, who earlier joined Lipsitch in supporting the use of challenge trials. “Are you going to hope that tens of thousands of people will altruistically be willing to forgo access to a proven vaccine? … Are you going to block their access to the vaccine?” he asks. Challenge trials offer a way to speed testing of other vaccines, which the world may end up needing.

Seema Shah, a bioethicist at Northwestern University who has written about challenge trials, thinks such trials could still be useful, but there is less urgency now. And she would like to see more ways to ensure participants’ safety, such as finding biological markers for people at greater risk of getting sick. “I think I would feel more comfortable waiting a bit to see how those things developed and whether the risk could be minimized further,” she says.

Lipsitch agrees that “the immediate need is not great” for human challenge trials. But, he adds, researchers “need to keep preparing in case we have reason to start doing them.”