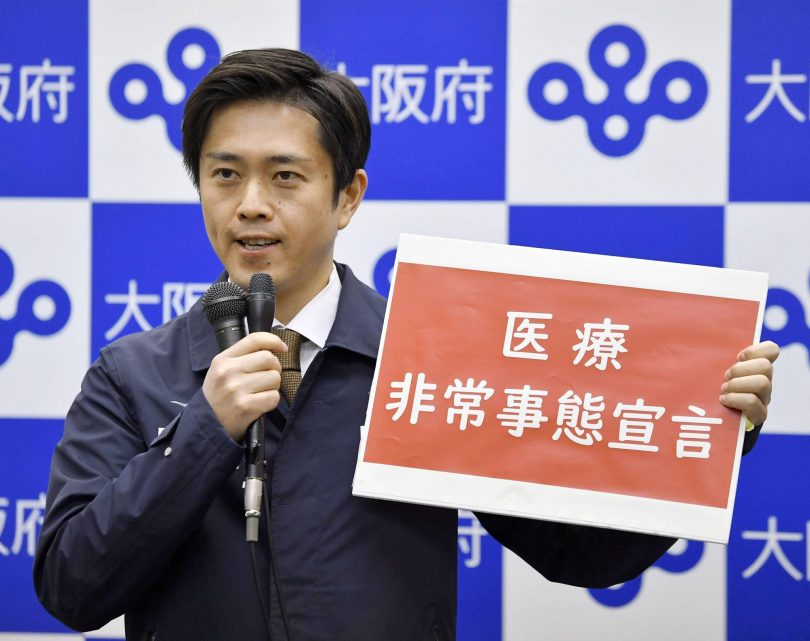 OSAKA – Facing a growing shortage of nursing staff amid a new wave of coronavirus infections, Osaka Prefecture is preparing to request that the Self-Defense Forces dispatch nurses to a new facility for seriously ill patients that is set to open on Dec.15.

“I’m in discussions with the Self-Defense Forces, where there are nurses,” Osaka Gov. Hirofumi Yoshimura said on a local television program Saturday, as the prefecture entered the first weekend of a local state of emergency.

“We will make preparations for a possible dispatch of SDF nurses (to Osaka), assuming that we will accept a request” from the governor, he said on a television program.

The prefecture is expected to make a formal request early this week to the SDF to provide as many nurses as it can for a 30-bed temporary emergency facility for seriously ill coronavirus patients. The facility, set to open in the city of Osaka, has secured only 50 of the necessary 130 nursing staff.

In order to recruit the remaining 80 staffers, Yoshimura issued a call late last week to the other seven Kansai area prefectures for as many as they could spare. But facing their own rises in coronavirus cases and with most having fewer medical facilities than Osaka, the responses have been slow.

As of Sunday, only Wakayama Prefecture had confirmed it could dispatch two nurses. Nara Prefecture said it was making arrangements to spare a few, but gave no exact number. Kyoto Prefecture was even more vague, saying the matter was being discussed but that cooperation with Osaka was necessary.

Hyogo Prefecture, with its largest city, Kobe, only 20 minutes from Osaka by train, faces its own rise in cases that are straining available resources. On Friday, prefectural officials said that 68.9% of hospital beds were occupied, including by non-coronavirus patients. Seriously ill patients occupied 32.7% of all available beds.

“We’d like to consider Osaka’s request to dispatch nurses. But it’s difficult to do at present,” Hyogo Gov. Toshizo Ido told the prefectural assembly Friday.

The Osaka center for seriously ill coronavirus patients, completed at the end of November, is a prefab building located beside a hospital in the city’s Sumiyoshi Ward. All beds are equipped with ventilators.

As of Saturday, Osaka had recorded more than 300 new coronavirus cases for five straight days. The percentage of hospital beds occupied by seriously ill patients hit 66% late last week and was expected to reach 70% early this week.