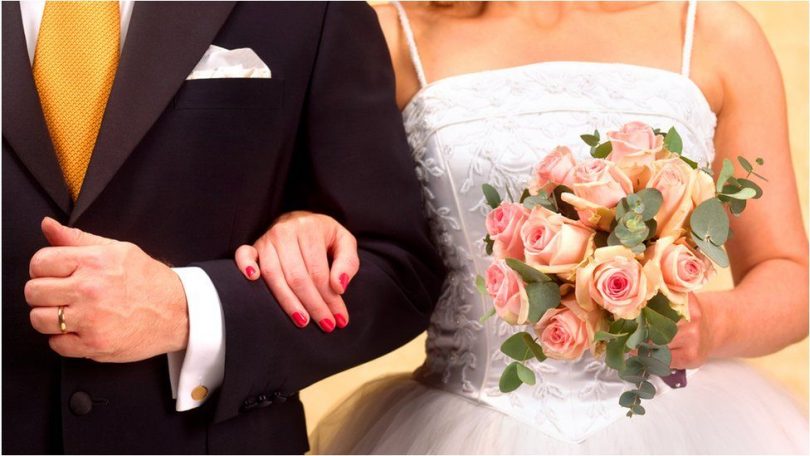 Take one bride, one groom, a church service and a wedding reception.

Throw in guests from various parts of the United Kingdom and you’ve got one heck of a party to plan.

But throw in a pandemic, and the planning turns into a logistical nightmare.

Mark Wilson, 31 and his bride-to-be Amy Coats, 29, found themselves facing ever changing Stormont Executive guidance about their wedding.

They initially planned a big, church wedding in Newtownards, County Down, in July but ended up changing their plans twice.

They also had to navigate three different sets of coronavirus guidelines as they were having guests from Northern Ireland, England and Scotland.

So what did they do?

Get married on 18 July with 140 guests in a church in Newtownards, followed by a hotel reception.

But coronavirus put paid to any notion that so many people could gather in one place.

So, they had a small ceremony in a friend’s garden, complete with marquee and buffet tea, and postponed their lavish reception until November. Or so they thought.

Mark said: “My friend offered us the use of his garden and we thought it would be better to move ahead with that, given that July would probably be a nice month.”

The night before the wedding, bride-to-be Amy was busy making sandwiches instead of relaxing with her bridesmaids, most of them were still across the Irish Sea.

Mark said: “Only one of Amy’s five bridesmaids was able to be there. Her sister managed to get over from the Isle of Skye the day before the wedding.

“It was too close to the date to be able to say for certain it was going to go ahead because even with the outdoor thing, we didn’t know how many we were going to be allowed.”

Mark’s sister, who lives in Northern Ireland, stepped in as Amy’s second bridesmaid.

Mark said it was very stressful – citing a “lack of clear guidance” from the government.

“There was the looming notion that at any moment the government would decide ‘you can’t do this’,” he said.

“It was only on the Thursday that the government confirmed that you were able to have weddings with 30 people.”

Despite a “lovely, intimate ceremony” in the garden, the pair were keen to share their joy with family and friends at an official reception.

So they drastically reduced their guest list for a hotel reception on 21 November, with strict rules on social distancing and table numbers.

As fate would have it, the guidelines were changed less than 48 hours before their big day, meaning their hotel, which had closed on 19 October due to restrictions, had to remain shut.

“At that stage England was in a full scale lockdown,” he said. “Amy wouldn’t have been able to have her family there, even her parents. And people here don’t feel safe [to travel].

“It was disappointing because, at this stage, we had our wedding and we had a good day. This was going to be the cherry on top.”

In what they hope will be third time lucky, the couple have rescheduled the reception to 10 July 2021 – nearly a year after their original date.

“The two of us have generally agreed that once you get past the year mark, the spectacle of trying to pretend it’s a wedding reception just disappears,” said Mark.

‘We couldn’t imagine going ahead with any guests missing’

Aishling Mullan from Cookstown, County Tyrone, had planned to marry Mairtin Hearty from Belleeks, County Armagh, on 11 December this year.

The plan for 200 guests and a hotel reception in Carlingford, County Louth.

In the Republic of Ireland, the current guidance means there is a limit of 25 guests for the ceremony and reception.

So the couple, who are both 29, postponed their wedding until March 2021.

“We thought this would give us some time to allow guest numbers to increase,” said Aishling.

“We were still planning for March – until September when the Irish government released their Plan for Living with Covid-19. It was pretty clear restrictions could still be in place by March.

“There were a few weeks around this time that wedding guidelines were changing weekly, brides were finding out with a few days’ notice they needed to cut guests from 50 to 25.

“We didn’t want to find ourselves in this situation.”

So the couple decided to postpone again, this time until 30 December 2021.

“A few people had said to just go ahead with close family, but for us, our parents, siblings and nieces and nephews account for almost 40 guests. We just couldn’t imagine going ahead with any of them missing.

“We also wouldn’t have taken the risk even with the reduced number of guests.

“There was always a chance some one of us, parents or guests caught the virus or were a close contact in the days leading up and missed the wedding, or we went ahead and guests fell ill afterwards.

“For us, we’d rather hold off and have as close to the original day we had planned with as many of our friends and family safely there.”

Antoinette Smith, 32, and Gary O’McGlinchey, 41, are also in limbo.

The Derry couple got engaged on Valentine’s day 2018 and were due to get married in March.

But then the restrictions were announced and they postponed their dream wedding to August. As that date grew closer, they moved it again until next March.

They’ve planned a big day with 100 guests and live music – but are prepared to postpone for a third time if they cannot have the day they want.

Antoinette said: “We’ve been doing loads of planning. When Covid hit, there’s nothing we could really do. It’s just a waiting game.

“We have a lot of friends and family… that wanted to come. For me, it’s every girl’s dream, it’s their special day, and the way I see it, we’re only going to do this one time.

“[If] we can’t have a reception, [including] music, it’s not the day I’m wanting. It doesn’t leave us with many options.”

The couple are prepared to wait – but still have a anxiety about the lockdown.

“Right now we’re panicking and worrying, but we’re excited to see if things get to where we want, if not then the stress might kick in when we have to go through all this again,” she said.

“We don’t want to look back and think ‘should we have waited’ we’re still going to be together no matter what. We will get married one day”.