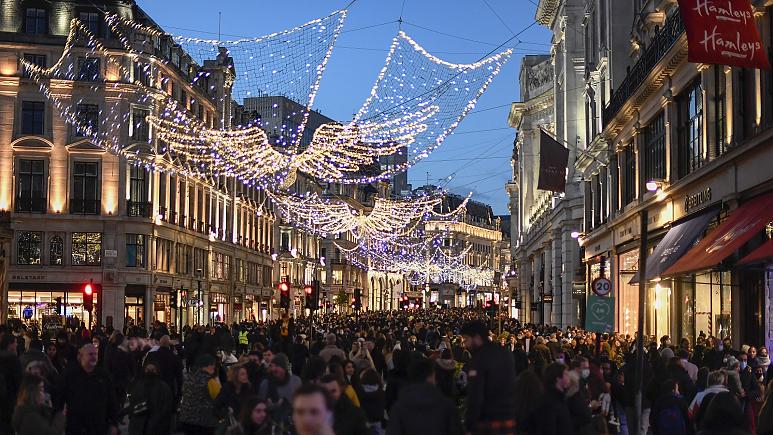 At present, coronavirus restrictions across the whole UK will be legally rolled back between December 23 and 27 to allow three households to form a ‘so-called’ bubble both in and outdoors.

But following a sharp spike in new infections that has stoked fears about another resurgence of the pandemic, families are being urged to consider the rules as the outer limits of what they can do.

“Have yourselves a merry little Christmas and, I’m afraid, this year I do mean little,” British prime minister Boris Johnson said at a press briefing on Wednesday. “I want to stress these are maximums, not targets”.

Johnson said it would be “inhuman” to ban Christmas but that in light of the “worrying” rises in new infections in some parts of the country, people should think hard about what to do. He said anyone planning to meet others during the easing should start limiting contacts from this Friday, for example.

His comments echoed those of other leaders elsewhere, though Wales has actually put a number to it, with First Minister Mark Drakeford saying two households should meet.

“This has been such a long and difficult year. But that cannot lift the responsibility from us to act now,” Drakeford said as he urged people celebrate with smaller festivities.

Scotland has also tightened its guidance, with First Minister Nicola Sturgeon reminding Scots it would be safer to spend Christmas “in your own home with your own household”.

She added: “If you can do that, that is my strong recommendation.”

It comes as the four nations of the UK faced mounting calls to scrap – or at least limit – the easing of restrictions following a spike in new infections.

Michael Gove, one of the most senior members in the British government, which sets public health policy for England, held talks on Tuesday with leaders from Scotland, Wales and Northern Ireland. Though no change of plan was announced, further discussions are taking place today.

Perhaps the loudest voice in the debate was a joint editorial from two of the country’s leading medical journals. In only their second joint editorial in their more than 100-year histories, the British Medical Journal and the Health Service Journal urged a rethink of a “rash” decision that they said will “cost many lives”.

“We are publishing it because we believe the government is about to blunder into another major error,” they said.

Britain’s Conservative government, along with the devolved administrations, agreed last month to allow a maximum of three households to mix between December 23 and December 27, regardless of what local restrictions are in place.

But with new infections rising in many parts of the country, there are growing concerns that the government’s Christmas relaxation will see a further escalation in infections and deaths and put too much pressure on the already-stressed National Health Service (NHS).

Sir Keir Starmer, leader of the opposition Labour party, was one who called on prime minister Boris Johnson to call an emergency meeting to review the decision.

“I understand that people want to spend time with their families after this awful year, but the situation has clearly taken a turn for the worse since the decision about Christmas was taken,” he said.

Any potential easing over Christmas contrasts with measures being taken by other European nations, such as Germany and the Netherlands, which have announced sweeping new restrictions for the holidays.

When the Christmas easing was first announced last month, Johnson was careful to stress that households should be “jolly careful, especially with elderly relatives”.

However, that easing announcement was predicated on an assumption that new cases would be on a downward trajectory.

But new infections have been increasing again, with another 18,450 announced on Tuesday. Though down a couple of thousand from Monday’s tally, figures over the past few days have been consistently higher than those recorded in the preceding two weeks.

The resurgence has come despite a four-week national lockdown in England that only ended in early December, and other stringent measures taken in Scotland, Wales and Northern Ireland.

In light of the rising number of cases, London on Wednesday will join other major cities in England, including Birmingham and Manchester, in Tier 3, the highest level of restrictions in which pubs and restaurants are closed apart for takeouts and deliveries. People in Tier 3 areas – which will soon include a majority of England’s population – are not allowed to meet socially in private or at most outdoor public venues with anybody they do not live with.

London Mayor Sadiq Khan was among those calling for a rethink.

“The concern is this – the rules have been relaxed for five days, allowing household mixing for up to three different households, and inevitably when people are in their own households, they tend to be less vigilant,” he told BBC Radio.