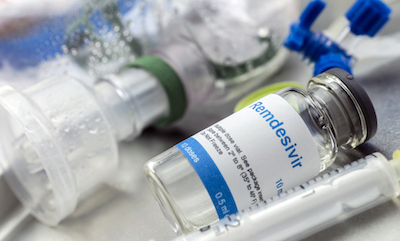 The drug remdesivir is likely to be a highly effective antiviral against SARS-CoV-2, according to a new study by a team of UK scientists. Writing in Nature Communications, the researchers describe giving the drug to a patient with COVID-19 and a rare immune disorder, and observing a dramatic improvement in his symptoms and the disappearance of the virus.

The response to the COVID-19 pandemic has been hampered by the lack of effective antiviral drugs against SARS-CoV-2, the coronavirus that causes the disease. Scientists had pinned hope on the drug remdesivir, originally developed to treat hepatitis C and subsequently tested against Ebola. However, results from large clinical trials have been inconclusive, and in early October the World Health Organization (WHO) announced that the drug did not significantly reduce mortality rates. The question is more complicated, however, and a clinical team have now used a different approach to determine the effects of the drug on COVID-19 in a closely monitored patient.

Dr. James Thaventhiran from the MRC Toxicology Unit at the University of Cambridge said: “There have been different studies supporting or questioning remdesivir’s effectiveness, but some of those conducted during the first wave of infection may not be optimal for assessing its antiviral properties.

“Mortality is due to a combination of factors, likely including unchecked viral replication and, importantly, the response of the immune system. A clinical trial that looks only at remdesivir’s impact on mortality will have difficulty distinguishing between these two factors. This limits our ability to ask the simple question: how good is remdesivir as an antiviral?”

To answer this question, a team led by scientists at the University of Cambridge and Barts Health examined the case of a 31 year old man with XLA, a rare genetic condition that affects the body’s ability to produce antibodies and hence fight infection.

The patient’s illness began with fever, cough, nausea and vomiting, and on day 19 he tested positive for SARS-CoV-2. His symptoms persisted and on day 30 he was admitted to hospital, where he was given supplemental oxygen due to breathing difficulties.

Unusually, his fever and inflammation of the lungs persisted for longer than 30 days, but without causing severe breathing problems or spreading to other organs. The researchers say this may have been due to his inability to produce antibodies—although antibodies fight infection, they can also cause damage to the body and even lead to severe disease.

At first, the patient was treated with hydroxychloroquine and azithromycin, which had little effect, and the treatments were stopped on day 34. The patient then commenced a ten-day course of remdesivir. Within 36 hours, his fever and shortness of breath had improved and his nausea and vomiting ceased. Rising oxygen saturation allowed him to be taken off supplemental oxygen.

This dramatic clinical response was accompanied by a progressive decrease in levels of C-reactive protein (CRP), a substance produced by the liver in response to inflammation. At the same time, doctors saw an increase in the number of his immune cells known as lymphocytes, and chest scans showed that his lung inflammation was clearing. The patient was discharged on day 43.

A week after discharge, the patient’s fever, shortness of breath and nausea returned. He was readmitted to hospital on day 54 and given supplemental oxygen. He again tested positive for SARS-CoV-2, was found to have lung inflammation, and his CRP levels had increased and his lymphocyte count fallen.

On day 61, the patient began treatment with a further ten-day course of remdesivir. Once again, his symptoms improved rapidly, his fever dropped and he was taken off supplemental oxygen. His CRP and lymphocyte count normalised. Following additional treatment with convalescent plasma on days 69 and 70, he was discharged three days later and is no longer symptomatic.

The patient’s inability to clear his infection without antiviral medication is very likely to be due to his lack of antibodies, say the researchers. However, there are other immune cells that contribute to fighting infection, including those known as CD8+ T cells. The team observed that the patient was able to produce CD8+ T cells that responded to the ‘spike protein’ on the surface of the virus—spike proteins give the virus its characteristic crown profile (hence the name coronavirus). While insufficient to clear the infection spontaneously, this likely contributed to the clearance of virus during the second course of remdesivir.

Dr. Nicholas Matheson from the Cambridge Institute of Therapeutic Immunology and Infectious Disease (CITIID) at the University of Cambridge added: “Our patient’s unusual condition gave us a rare insight into the effectiveness of remdesivir as a treatment for coronavirus infection. The dramatic response to the drug—on repeated challenge—suggests that it can be a highly effective treatment, at least for some patients.”

The team further suspect that remdesvir is likely to be most beneficial when administered early in infection, before the virus is able to trigger a potentially catastrophic immune response. They say that the course of their patient’s disease also underscores the important—but often conflicting—roles that antibodies play in protecting us from infection.

“The fact that our patient was unable to fight off the disease without treatment suggests that antibodies contribute to the control of SARS-CoV-2,” explained Dr. Matthew Buckland from the Department of Clinical Immunology, Barts Health, London. “But this lack of antibodies may also have prevented his COVID-19 from becoming life-threatening, because he had no antibodies to trigger a damaging immune response.

“All of this suggests that treatments will need to be tailored for individual patients, depending on their underlying condition—for example, whether it is the virus that is causing the symptoms, or the immune response. The extended viral monitoring in our study was clinically necessary because in April 2020 we didn’t know if this drug would be effective. Adopting this approach more widely could further clarify how best to use remdesivir for clinical benefit.”