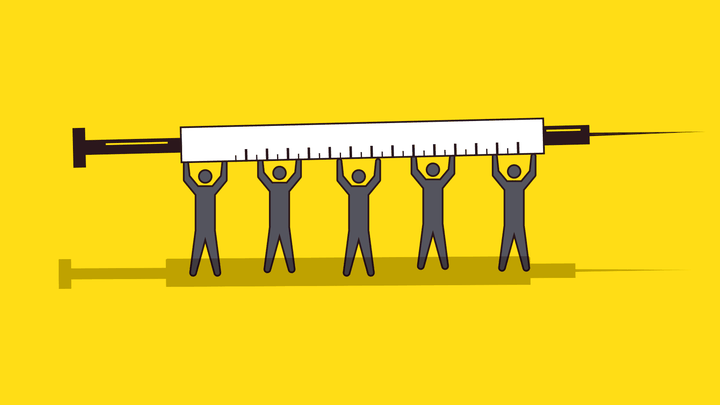 To succeed in immunizing the population against COVID-19, the United States must draw on the resources it already has.

This week is coming to a close with truly miraculous news: In the coming days, Americans across the country are expected to begin getting vaccinated against COVID-19, a virus that emerged just a year ago. But even miraculous vaccines do little good for public health if people refuse to take them. What will persuade millions of Americans to take these new vaccines, which were developed and tested in record time?

To succeed in vaccinating the population against COVID-19, the United States must draw on the resources we already have: a population that generally supports vaccination and networks of trust that connect health-care professionals with their patients and people with their communities.

The good news is that we start from a position of strength. Contrary to popular belief, very few Americans actually oppose vaccines. For instance, only a tiny proportion of parents forgo vaccination for their children. Prior to the pandemic, vaccination rates were generally high and stable for very young children and those of school-entry age. For example, 95 percent of children were vaccinated against measles, mumps, and rubella with the MMR vaccine in the 2018–19 school year. Pockets of hesitancy remain and improvement is needed on some vaccines, but we should not confuse the visibility of a small number of anti-vaccine activists with sentiment toward vaccines in the broader population.

Similarly, despite concerns that people are inundated by misinformation about vaccines online, exposure to it seems quite rare; in a study, my co-authors and I estimate that only 19 percent of Americans encounter one or more vaccine-skeptical web pages each year. To date, no convincing evidence has demonstrated that online misinformation is increasing hesitancy, which long predates the internet.

These facts are encouraging, but successfully persuading eligible adults to get vaccinated will still be challenging, especially on a voluntary basis. Consider uptake of the flu vaccine, another voluntary vaccine that seeks to protect people from a virus that kills hundreds of thousands of people globally each year. During the 2019–20 flu season, for instance, only 48 percent of adults age 18 and older and 64 percent of kids were immunized, including just 70 percent of the seniors who were most at risk. The barriers to immunization are diverse and include misperceptions about the risks of the flu and the vaccine, as well as logistical and (perceived) financial obstacles.

COVID-19 is far deadlier than the flu, which may increase some people’s desire to get vaccinated, but the vaccines are new and thus present novel communication challenges.

It is useful in thinking about the path forward to distinguish between three groups of people. The first group comprises the adults with largely favorable attitudes toward vaccines who vaccinate their children and tend to get seasonal influenza shots. This group is ultimately very likely to take a COVID-19 vaccine once one becomes available; the primary challenge is helping them turn those intentions into action by reducing logistical barriers that could limit immunization, such as mobility restrictions, perceived cost, scheduling challenges, fears of going out, etc. These obstacles will be especially challenging for the initial COVID-19 vaccines because we must make sure that people get both doses that are recommended for protection.

The second group is the very small subset of Americans with strongly negative views toward vaccines. Realistically, people in this group will be extremely hard to persuade, but we should try to do so not just for the sake of their own health but to limit the potential risks they could pose to people in their communities and social networks.

The third and most important group, however, is made up of Americans with mixed to somewhat favorable attitudes toward vaccines. Though the childhood-immunization data suggest that parents in this group vaccinate their children at very high rates, they are less likely to get vaccines themselves as adults (for instance, by getting a flu shot every year). Persuading them to get a COVID-19 vaccine will be crucial—this group is both much larger as a proportion of the population than the anti-vaccine fringe and also more receptive to public-health guidance.

Persuading Americans to get vaccinated against COVID-19 poses different challenges than other new vaccines, such as the ones for shingles. The response to the pandemic has become highly politicized, creating an increased risk that people will forgo vaccination because of misperceptions about the risks of the virus and/or the safety and efficacy of the vaccines. Even then, however, the public-health consensus is stronger than media coverage and online attention might suggest. Americans overwhelmingly report wearing masks, for instance. If vaccination can be presented as a voluntary, commonsense public-health measure, most people will do it.

The question, though, is how to present it as such. In general, increasing vaccine uptake remains challenging—scientific reviews frequently highlight the lack of convincing experimental evidence for interventions that increase immunization rates. In particular, educational interventions via face-to-face conversations have a limited record of efficacy. And if professionals can’t do it, most people are probably not going to be able to persuade their vaccine-skeptical friends and relatives either.

Trying to counter vaccine myths, especially, is unlikely to be the best approach. Studies my co-authors and I have conducted and research by other scholars suggest that science-focused corrections of vaccine misinformation are typically less effective than other messages—for example, focusing on the risks of the diseases that vaccines protect against. In some cases, correcting vaccine myths may be ineffective or even counterproductive.

The most effective messengers for vaccines are instead the medical professionals whom so many Americans trust. At the national level, that means Anthony Fauci, who polls more positively than the CDC itself and whose endorsement has been shown to increase vaccination intention. But people especially need to hear about the importance of getting vaccinated from trusted health-care providers. Parents, for instance, overwhelmingly name their child’s doctor as their most trusted source of information about vaccines. Primary-care providers for adults can hopefully play a similar role.

Not all Americans trust medicine and science. Reaching them will require working with well-regarded institutions, such as religious organizations, schools, businesses, and civic groups. It will be especially important to partner with advocates in communities that have been mistreated or marginalized in the past. Such an approach proved far more successful in reducing unsafe behaviors during the Ebola epidemic in West Africa, for instance, than warnings from distrusted or unfamiliar sources. Public-health officials reported that messages about the risks posed by unsafe burial and mourning practices were most effectively delivered in conversations brokered by local leaders and community health workers.

Celebrities and public figures may also have a role to play. The former presidents Bill Clinton, George W. Bush, and Barack Obama have all indicated that they would get vaccinated in a public setting to build bipartisan confidence in a COVID-19 vaccine. Other celebrities could potentially play a role like Elvis Presley did during the polio-vaccination campaign. Although celebrities are not widely trusted sources of information on vaccines, they could help reinforce the social norm around vaccination and build confidence in expert sources such as Fauci, whom the NBA star Steph Curry interviewed in March and October, for instance. Endorsements like these could help promote confidence among Republicans, women, and Black people—three groups who report relatively low vaccination intentions.

This outreach effort will necessarily be iterative because of the nature of the phased COVID-19 vaccine rollout, which will initially prioritize high-risk groups. Americans who are hesitant now will have a chance to observe the process and see that people they know and trust are not only endorsing a vaccine but getting it for themselves and their loved ones. Moreover, they will have a chance to see that a vaccine is safe and effective.

The rollout itself also presents its own set of challenges, however. First, keeping the process as depoliticized as possible will be crucial. The timing of the rollout will help—the vaccine-distribution process spans the last months of the Trump administration and the first part of President-elect Joe Biden’s term, which could help to reduce its political association. The postelection timing of the release of the initial vaccine data may also help to assuage public concerns; intentions to vaccinate declined in the fall in part because of fears that a vaccine would be rushed before the election. Still, we should reaffirm that the safety and efficacy of the vaccines were verified through a thorough process. Similarly, the approval and deployment process should be led by nonpartisan health experts (including those at the state level), not political figures in the outgoing or incoming administrations.

A second crucial challenge will be limiting the spread of false information about the vaccines. Misleading media reports could damage public confidence. Most notably, MMR vaccine rates were driven from more than 90 percent (close to the levels required for herd immunity) to 80 percent in the United Kingdom after intense media coverage of fraudulent research linking it to autism. Given the current media environment, the risk of sensationalized or false claims tying adverse events to the vaccines seems high. After all, millions of people are going to get a new vaccine. Some of them will inevitably die or have unexpected medical events for unrelated reasons. It will be essential to prepare the media and the public for this possibility and to underscore the importance of scientifically testing for connections to adverse events rather than presenting misleading or unrepresentative anecdotes in a sensationalized manner.

The current president himself is a risk factor for distorting media coverage. So far, he has thankfully touted the vaccines and claimed credit for them, but he has a history of making dubious claims about vaccines that research shows can increase concerns among his supporters. If he starts tweeting unverified claims about the vaccines, it could help create another fiasco.

Similarly, though online misinformation’s effect on vaccine uptake in the U.S. has not yet been demonstrated, the speed with which anti-vaccine information circulates on platforms such as Facebook and YouTube poses reasons for concern. Both companies now say they will remove false claims about the vaccines, but content-moderation policies are usually easier to announce than to enforce effectively at platform scale.

Still, though deploying a COVID-19 vaccine successfully will not be easy, the history of public health suggests that it is possible. Reductions in vaccine-preventable disease are one of the great achievements in human history. Stopping COVID-19 could be our next great accomplishment if we can build and maintain public faith in vaccines while limiting the politicization and misinformation that afflict so many other topics in our lives.