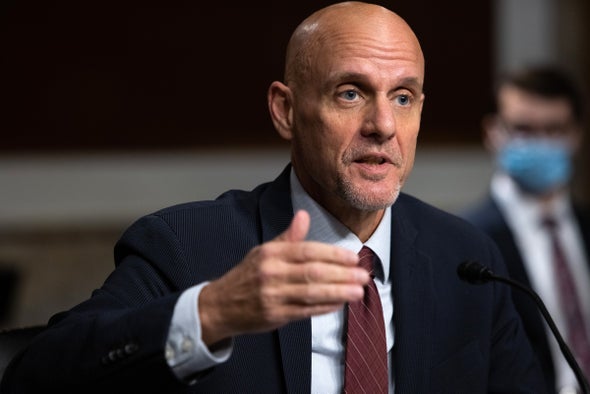 All eyes are on a meeting today to determine whether the U.S. Food and Drug Administration will grant an emergency use authorization (EUA) for a COVID vaccine.

Several promising candidates have been developed at a breakneck pace. The FDA published guidance in June and October laying out the criteria a vaccine must meet for an EUA. The pharmaceutical company Pfizer (in partnership with the German firm BioNTech) applied for one for its vaccine on November 20. Moderna submitted an application for its vaccine on November 30. The U.K. granted emergency approval to Pfizer’s vaccine on December 2. At the FDA’s Center for Biologics Evaluation and Research’s Vaccines and Related Biological Products Advisory Committee’s public meeting, committee members will discuss the Pfizer data and vote on whether to recommend an EUA in the U.S., which could be granted as early as Friday. It will discuss Moderna’s data next week.

Vaccines typically take years to develop, but a number of them against COVID have now been created and tested in tens of thousands of individuals in less than one year. This speed has sparked concerns—exacerbated by outgoing president Donald Trump’s apparent attempts to pressure the FDA to quickly approve a vaccine—about whether the process has been too rushed. Meanwhile others have accused the agency of moving too slowly. Although the FDA expedited its normal review process from months to weeks, its commissioner Stephen Hahn insists that “we’re not going to cut any corners in our assessment of the vaccine.”

Scientific American spoke with Hahn about what the procedures for evaluating COVID vaccine data are, which groups of people might be covered under an EUA, and why the American public should trust that any authorized vaccine will be safe and effective.

What can we expect from the meeting on Pfizer’s vaccine this week?

What is the soonest we might hear about the FDA potentially granting an EUA?

It really depends on the comments that come out of the advisory committee and the advice that we get. What I can tell you, without prejudging that time frame, is that we will work around the clock, and we will act expeditiously.

Can you explain why the U.K. was able to authorize the Pfizer vaccine a week ahead of when the FDA will be looking at it?

I can’t speak to U.K. processes and why they made the decision they made, which has engendered, certainly, a lot of discussion in the press and among regulators—that’s for sure. What I can tell you is that we are one of the few regulatory agencies in the world that do an analysis of the data on our own, drawing our own conclusions. This is what the American people have come to know from the FDA. It’s why we’re respected around the world as the gold standard for safety and efficacy of medical products.

If an EUA is granted, which groups of people will it apply to? Might they include the elderly, children or pregnant women?

We will be asked questions such as ‘What are the data for children? What are the data for racial and ethnic minorities? Are there differences in safety? Are there differences in efficacy among different populations?’—because that will inform decisions that need to be made regarding distribution and prioritization. Questions abound, for example, about whether there is substantial immunity after one injection because these vaccines were given in two injections as part of the clinical trial. These are very important questions that will guide a lot of what we’re going to say with respect to our emergency use authorization—if, in fact, we authorize these vaccines. And it’s very important because it provides the appropriate guidance on the safety and effectiveness of the vaccines. We take that responsibility very seriously. The bottom line for me is: If, in fact, we and our scientists here authorize a vaccine, I have complete and absolute confidence that that will be the right decision. We’ll have done that right for the American people—and I will certainly, when it’s appropriate, get in line to get that vaccine.

And we’ll want to look at immunosuppressed people: people who have kidney failure, people who have what’s called autoimmune diseases. We’ve looked extensively at the data for those as well, because we will, of course, be asked the question ‘Should certain populations receive the vaccine?’ What we can do in the EUA, depending on the data, is actually address those specific questions. If there are populations that we feel require that the data show specific instructions regarding the administration of vaccine, we will obviously put that in the EUA.

Have you been in touch with President-elect Joe Biden’s transition team about a vaccine rollout or any other matters that are relevant to a smooth transition?

I have not. Those interactions with the transition team come through HHS [the Department of Health and Human Services]. When or if I’m asked to do that, I will do so right away to make sure that there is an appropriate exchange of information. I do know that the transition team, at the request of HHS, has spoken to folks within the FDA.

Did the immense urgency of this pandemic affect how you approached the normal vaccine approval process? Did you have to make any compromises in terms of safety or efficacy?

This is a really important point you’re bringing up. First of all, this is one of the reasons we’ve been so transparent in our June 30 guidance regarding vaccine development for COVID-19 and the October 6 guidance on emergency use authorization. We’ve been very clear from the beginning on what data we would need to see: clear and compelling evidence of safety and efficacy from at least one randomized clinical trial. That is very similar to what we would normally see in a biologics license application, or BLA, which is the normal approval process. And we also wanted to see quality manufacturing and adherence to manufacturing standards, because we want to make sure that every vaccine produced is of high quality and similar to the ones that were used in the clinical trial. We also worked ahead of any application to make sure that we were on top of the manufacturing issues that might or might not arise with any vaccine.

This was an expedited process, compared with what we normally do. Let me just give you an example: for a clinical trial that has 44,000 participants such as the Pfizer trial, that application, if it were part of the biologics license application that came before it, would normally be reviewed in a four- to six-month time period. We received that application on November 20, so you can see that in a matter of weeks, we’re doing the work that’s very similar to what we would do for an application that would take us months. And that is because, of course, of the urgency of the situation.

What steps will you be taking to reassure the public that any vaccine that is authorized is indeed safe and effective?

We’re not going to cut any corners in our assessment of the vaccine. We need to make sure that we’re comfortable that we can make recommendations to the American people about safety and efficacy.

Confidence in the vaccine is of utmost importance to us. There has been quite a lot of discussion about vaccine hesitancy in the country. We wanted to make sure that there was confidence in the FDA’s review procedures and that we were following them. Thus, the need for an outside group of experts, the [vaccine advisory] committee, that was part of our normal process. And we felt strongly that that would indeed bolster confidence. These scientific eyes on the data are really important for America to see. I think that transparency—and the transparency that we will have with respect to explaining any decision we make—is really important.

President Trump has baselessly complained that the FDA slowed the approval of vaccines and therapeutics until after the election. Have you ever felt pressured by the president or his administration to move more quickly on a vaccine? And if so, has that pressure interfered with your ability to do your job?

Of course there’s pressure—the pressure of the moment is substantial. There are people who would argue we’re moving too fast, and there are people who would argue we’re moving too slow. The reason we were very transparent about what we needed to see and the process we needed to put in place to make the best decision for the American people was precisely for this reason: to demonstrate that we were not just following that process but making the absolute best decision. So yes, there’s pressure because this is a major medical event. It’s a serious and life-threatening pandemic. And we have to move quickly. We’re aware of the human toll that this has taken socioeconomically, medically. But at the same time, we’re also aware that in order to put this pandemic behind us, we need people to take the vaccine, we need to achieve herd immunity. And in order to do that, folks have to have confidence that they can and should take the vaccine. Part of that is our making sure that we do a very thorough scientific review.

I have to tell you that, personally and also [speaking for] the agency that I represent, we are always going to do the right thing. The FDA did not control the timing of when data were available from a clinical trial. That’s in the domain of the companies that sponsor these applications. We have spent a lot of time talking to them. We’re aware of their decision-making, and we stand ready and have stood ready to look at data when they’re available. No other factors went into our decision-making other than a knowledge and a review of science and data. And that’s going to continue.