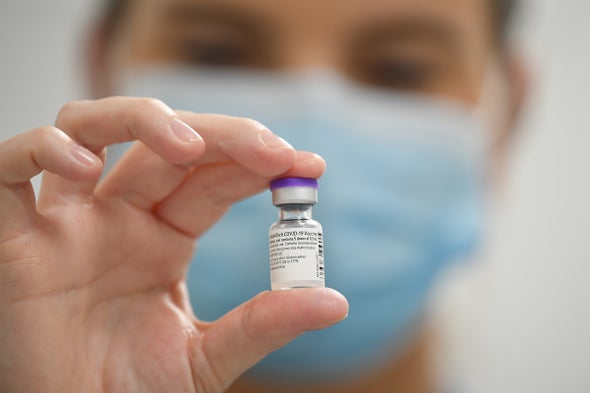 The FDA issued the emergency use authorization for the vaccine late on Friday. And immunizations of health care workers and long-term care facility residents could begin within days​

After months of intense anticipation, the U.S. Food and Drug Administration has granted an emergency use authorization (EUA) for the COVID-19 vaccine developed by the companies Pfizer and BioNTech—the first to be approved for use in the U.S. The news comes as a devastating surge in cases grips the country, with many hospitals approaching capacity and new records for deaths being set weekly. Immunizations will begin in the next few days and weeks for health care workers and residents of long-term care facilities such as nursing homes. Other groups will get the shot in the coming months as more doses become available. The authorization was first reported by the New York Times and the Washington Post.

An FDA advisory group, the Vaccines and Related Biological Products Advisory Committee (VRBPAC), voted on Thursday to recommend authorization of the vaccine for individuals age 16 and older. The committee reviewed data provided by the FDA’s own analyses and discussed issues including the vaccine’s efficacy in subpopulations, such as the elderly and minority racial groups, and ongoing monitoring of the roughly 44,000 participants in the late-stage clinical trial. The majority of VRBPAC members voted that the benefits of granting an EUA outweighed the risks, with 17 voting yes, four voting no, and one abstaining.

The Pfizer-BioNTech vaccine is a completely new type made from messenger RNAs (mRNAs)—bits of genetic material that, in this case, instruct cells to produce fragments of the novel coronavirus’s spike protein. The mRNAs are enclosed in lipid nanoparticles. Pfizer and BioNTech’s own analysis of their data showed that the vaccine (which is given in two doses, three weeks apart) is 95 percent effective at preventing COVID-19. Its efficacy was similar across all age, sex, racial and ethnic groups studied, including people with underlying health conditions such as heart or pulmonary disease or obesity. The companies said their vaccine showed significant efficacy, even just two weeks after a single dose, and the FDA’s analysis confirmed these findings. It remains to be seen, however, how long protection will last, whether the vaccine will protect against severe disease in the small subset of people who might develop it and whether the intervention is safe and effective in children younger than 16 or in pregnant women.

Experts greeted the news with enthusiasm. Nneka Sederstrom, director of clinical ethics at Children’s Minnesota, whose work focuses on health equity, is elated. “Now we really have a chance of getting things under control,” she says. But she notes that the biggest hurdle will be persuading individuals in the most at-risk communities, including people of color, to get the immunization. “We should continue to be transparent and open about the immune response and expected reactions to the vaccine,” she says, adding that community leaders should lead by example to show their confidence in its safety. Sederstrom, who is a health care worker and thus in one of the first groups eligible to receive the vaccine, says she would definitely get it herself. “As one of the only Black leaders in my institution, I want to be an example to other Black leaders,” she says.

“It’s a historic moment,” says Monica Gandhi, a professor at the University of California, San Francisco, School of Medicine. “Especially in the United States, there is no other way to get out of this pandemic except mass vaccination.” The vaccine’s 95 percent efficacy is “just incredible,” she adds. “I think many scientists are just sort of giddy, because I think the estimates of efficacy were 70 percent or lower.” The fact that Pfizer published a full report of its data—showing good representation of participants across ages, sexes, and diverse racial and ethnic groups—was also very encouraging, Gandhi says.

A key question discussed by the advisory committee was what should be done for people in the trial’s control group now that the vaccine has been authorized. Half of the trial participants received the vaccine and half received a placebo. If the vaccine is now offered to participants in the placebo group, that would limit regulators’ ability to continue to compare outcomes and assess safety and efficacy over a longer time period. On the other hand, there is a strong ethical argument that individuals who volunteered for the trial (especially those in high-risk groups) should be given an opportunity to get the vaccine when it is available to them. “I think the efficacy is too high not to offer it to them,” Gandhi says. William Gruber, senior vice president of vaccine clinical research and development at Pfizer, said in the VRBPAC meeting that the company has an ethical responsibility to inform participants of vaccine availability under an EUA and would offer it to those individuals who are covered by the EUA and prioritized by the U.S. Centers for Disease Control and Prevention before others. Participants will have the option of remaining uninformed as to whether they received the placebo and thus continuing in the clinical trial, he added.

Although the vaccine’s safety and efficacy appear very promising, some important gaps in information remain. More data are needed on how well the intervention prevents the rare cases in which individuals develop severe COVID-19. There were only 10 cases of severe disease in the study; nine of them were in the placebo group. Some speakers at the VRBPAC meeting also noted that there were not enough data on severe disease in Black or Indigenous populations, specifically. There are also no data yet on the vaccine’s impact on asymptomatic infection or transmission of the virus because the trial’s primary measure was preventing symptomatic COVID-19.

The trial also did not evaluate the vaccine’s safety and efficacy in pregnant women. And while it had enrolled some individuals ages 12 to 15 later in the process, there were not enough of them for sufficient data. “Those are really hard populations to study—and rightly so,” Sederstrom says. “You have to use extra precautions.” Studying how safe the vaccine is and how well it works in these groups will be important in the coming weeks and months. Gandhi notes that the FDA had encouraged clinical trials to include pregnant and breastfeeding women unless there was a biological reason not to do so. Nevertheless, she says she does not see any reason to suspect the Pfizer-BioNTech vaccine would be unsafe for pregnant women and adds that she would encourage them to be vaccinated.

The vaccine does cause mild to moderate side effects, which are expected and often a sign of a healthy immune response. Some people in the vaccine group said they developed redness, pain and swelling at the injection site, as well as fever, headache and fatigue, especially following the second dose. Side effects were more noticeable in younger participants. In addition, there were four cases of a type of temporary facial paralysis called Bell’s palsy and one case of a shoulder injury (both of which may have been related to the vaccine) in the vaccinated group. Pfizer and BioNTech say they will continue to monitor clinical trial participants for any serious side effects or death for a period of two years and will report any adverse events to the FDA.

Two people who received the Pfizer-BioNTech vaccine in the U.K.—where it was approved on December 2—suffered an allergic reaction, the Wall Street Journal and other outlets reported. Both of them had a history of severe allergies and carried adrenaline autoinjectors. A third person was later reported to have possibly also had an allergic reaction, but all three fully recovered after treatment. Allergic reactions to vaccines are not uncommon, and many carry warnings for people with a known history of serious allergies. As a precaution, the U.K.’s Medicines and Healthcare Products Regulatory Agency said people should not receive the shot if they have a history of severe allergic reactions to a vaccine, medicine or food.

But some experts disagree with advising people with common food or seasonal allergies against getting the Pfizer-BioNTech vaccine. “What happened in the U.K. were people who were hospitalized for [severe] allergies, not people who need to take [over-the-counter antihistamines],” says Gigi Gronvall, a senior scholar at the Johns Hopkins Center for Health Security. More data on the vaccine’s safety in individuals who have common food or other allergies should be made available so that people are not concerned, she adds. Nevertheless, Gronvall and others express excitement and relief at the vaccine’s authorization. “In a very tragic year, it is a bright, shining light that we have such an effective vaccine,” she says.

The FDA advisory committee is scheduled to meet again on December 17 to discuss granting an emergency use authorization for another COVID-19 vaccine made by the company Moderna.