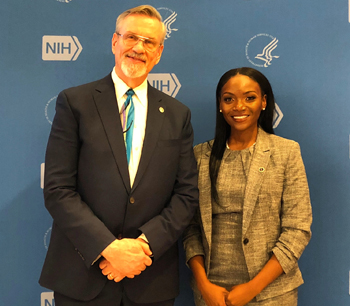 They had sleepless weeks, scrambles for lab equipment, and unprecedented pressure to understand the devastating virus that gripped the world in 2020. But this year’s Golden Goose Award winners also had something that brought hope to the end of a pandemic year: a head start.

Their years of federally funded research on coronavirus protein structures and antibodies — featuring a trio of camels and a llama named Winter, among other characters — made it possible to develop vaccines and therapies against the virus at astounding speeds, according to speakers at the event.

“Their collective work is ongoing, as is their curiosity, determination, and ingenuity, all in the service of advancing science and serving humanity,” said Sudip Parikh, CEO of the American Association for the Advancement of Science, which leads the award committee.

The Golden Goose was established in 2012 as a counterpoint to the late Sen. William Proxmire’s (D-Wisconsin) monthly Golden Fleece Awards that often ridiculed basic scientific research. The Golden Goose instead honors those whose federally funded research may have been considered odd or obscure when first conducted but has resulted in significant benefits to society.

The high stakes for public policy and health led this year’s award committee of bipartisan congressional supporters and science and higher education organizations to focus on science addressing the pandemic. “Nothing is more important for public policy than knowing what you’re talking about,” said Rep. Jim Cooper (D-Tennessee), sometimes called “Father Goose” for his role in establishing the award.

Coronaviruses like the one behind COVID-19 are studded on their surfaces with spike proteins that break into and hijack the molecular machinery of human cells to start an infection. In the NIH’s Vaccine Research Center in Bethesda, Maryland, Graham and Corbett had previously studied the details of spike protein structure in the wake of other coronavirus outbreaks like MERS and SARS.

When SARS-CoV-2 arrived, they used what they knew about the spike protein to replicate its genetic code, which would be used as the backbone of several COVID-19 vaccines. Their research and an existing partnership with the pharmaceutical company Moderna has led to a COVID-19 vaccine that could be available to some high-risk individuals by the end of 2020.

Laboratories around the world are collaborating on COVID-19 research “because every single scientist in the world wants to make sure we get through this,” Corbett said. “And I think it’s very clear that science is the only way that we will.”

At the NIH Rocky Mountain Labs in Hamilton, Montana, de Wit and Munster sprang into action after learning about the new coronavirus by applying what they had learned in developing animal models and vaccines for respiratory illnesses such as MERS, which first appeared in the Middle East in 2012. Munster’s initial NIH grant even paid for three camels, a purchase he recalls explaining to a supportive Anthony Fauci, head of the National Institute of Allergy and Infectious Diseases.

It was llamas for McLellan and his graduate student Wrapp — specifically a llama named Winter at Ghent University in Belgium. With funds from NIH and assistance from the Department of Energy’s Argonne National Laboratory, the researchers had been studying a tiny antibody produced only by llamas, alpacas, and camels. The antibodies produced by Winter after being infected with SARS coronavirus in early experiments can be paired with a larger human antibody, McLellan and Wrapp found, to bind tightly to the SARS-CoV-2 spike protein and block infection.

“When the pandemic breaks out, that’s not the time to start years of research on that pathogen,” McLellan said in a video shown during the ceremony. “You need to do it ahead of time.”

In 2017, Crowe and his team received a challenge and a grant from the Defense Advanced Research Projects Agency to produce an antibody for any virus from a survivor’s blood sample within 60 days. A 78-day sprint on Zika virus was their first attempt, and in January they pivoted from a planned avian flu simulation after learning about the new coronavirus outbreak in Wuhan, China.

With blood samples from around the globe, Crowe and colleagues made and tested thousands of monoclonal antibodies against SARS-CoV-2 that have been sent to pharmaceutical companies for further development, including some at AstraZeneca that are now in phase 3 clinical trials.

“I think the more we learn, we’re just sort of chipping away at the edges, and we see there’s so much we don’t understand, and that is medicine, therapeutics, prevention, vaccines,” said Crowe. “They all grow out of the curiosity of how the world works, which is discovered through basic science.”