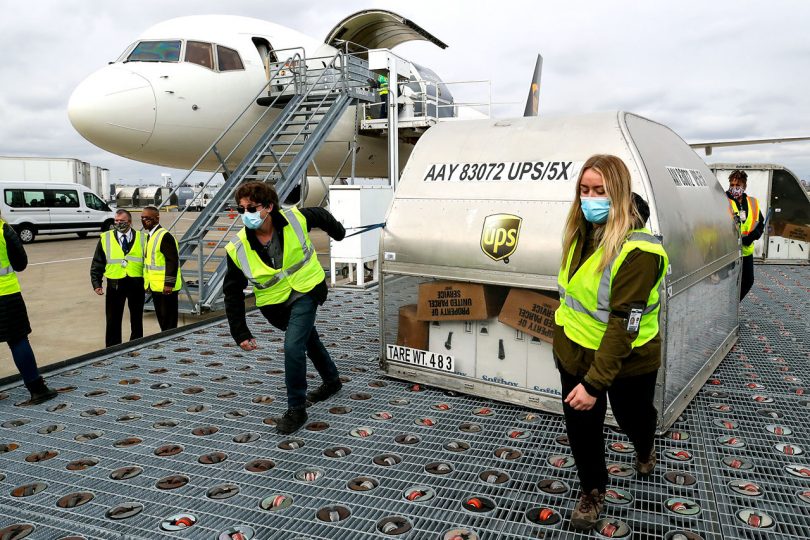 In March, a Seattle tech worker named Jennifer Haller received an outpouring of gratitude from strangers following news reports that she had received an experimental COVID-19 vaccine, a first outside of China, to test its dosing and safety. “This was one of the few things happening that people could latch on to and say, ‘OK, we’ve got a vaccine coming, disregard that it’s going to take at least 18 months,’” she said at the time.

Haller was overly skeptical about when an effective COVID-19 vaccine would arrive. But the 43-year-old woman, who received a very low dose of a candidate made by the biotech company Moderna and will therefore need to be vaccinated again, may be on target about when she, and billions of people globally, will finally get protection from the pandemic coronavirus, SARS-CoV-2. Although several vaccines have now proved their worth and won emergency use authorizations in multiple nations, they will remain in short supply for many months—even in wealthy countries, and especially for relatively young, healthy people like Haller.

In the rest of the world, the wait for these vaccines could last longer, into 2022, because richer nations have bought up most of the initial supplies, to the dismay of global health advocates. “Now, even if African governments had the money to put on the table, which many don’t, they will not get the vaccines,” says John Amuasi, a global health specialist at the Kwame Nkrumah University of Science and Technology in Kumasi, Ghana.

The COVID-19 Vaccines Global Access (COVAX) Facility, set up by the World Health Organization (WHO) and its partners to help purchase and distribute proven vaccines, was meant to avert such inequity. But COVAX is strapped for cash and its impact remains to be seen. “If in the first
6 months, Western Europe and the United States are the only regions that are vaccinating people, and other parts of the world are not being vaccinated until the end of 2021, then I think we’re going to have a very, very tense global situation,” says infectious disease researcher Jeremy Farrar, who heads the Wellcome Trust research charity.

Some countries around the world are not waiting for international help. In a global free-for-all, they are brokering deals with companies to secure their products and authorizing them for use even before final efficacy results are in. Among them are COVID-19 vaccines that could be cheaper and more abundant than the first successes.

Excitement about COVID-19 vaccines spread last month when trials of the Moderna candidate and another from Pfizer and BioNTech each revealed about 95% efficacy. But those vaccines, based on messenger RNA (mRNA) coding for a viral surface protein called spike, are tricky to make and transport. The United States has purchased 100 million doses of the Pfizer-BioNTech product, which received an emergency use authorization last week, but will only receive enough to start vaccination of 10 million Americans this year. The government says even with its prepurchase of the Moderna vaccine, which has yet to be authorized, the country will only have enough doses to have 100 million Americans fully vaccinated by the end of March. The United Kingdom, which was first to authorize the use of the Pfizer-BioNTech product, only has enough of that vaccine for 400,000 people this year.

The companies have vastly beefed up production capabilities for mRNA vaccines, an innovative technology that has never been manufactured on a large scale, but they have no hope of producing enough next year to cover the global population of more than 5 billion adults. In 2021, Pfizer and BioNTech project they will produce up to 1.3 billion doses, and Moderna hopes to make up to 1 billion doses. Like many COVID-19 vaccines, both require two doses per person.

Two other COVID-19 vaccines that have encouraging efficacy results—one from Russia’s Gamaleya Research Institute of Epidemiology and Microbiology and the second from AstraZeneca and its partner, the University of Oxford—could offer up to 1 billion and 3.75 billion doses, respectively, their makers say. Much of the world may also look to vaccines made by Chinese companies. Sinopharm, Sinovac Biotech, and CanSino Biologics are nearing the end of efficacy trials and say they can together  make 1.5 billion doses next year.

The Serum Institute of India, the world’s largest producer of vaccines, could boost supplies. It has signed contracts with the U.S. biotech Novavax to make roughly 1 billion doses of its candidate, which is just about to start a large efficacy trial. And it will supply COVAX with up to 200 million doses of the AstraZeneca-Oxford andNovavax vaccines for low- and middle-income countries.

All of these estimates depend on vaccine production running smoothly, and already, Pfizer and two other companies further back in the pack—Sanofi Pasteur and Novavax—have run into manufacturing delays. Many factors can trip up a vaccinemaker, including shortages of raw materials, equipment, or glass vials. In 2009, the pandemic flu vaccine was delayed because the influenza virus poorly replicated in eggs.

Richard Hatchett, who heads the Coalition for Epidemic Preparedness Innovations, expects production of COVID-19 vaccines should “increase fairly dramatically” by the end of 2021. By then, cost and other factors may supplant limited supply as the main obstacle for many countries. Moderna and Pfizer and BioNTech plan to charge $30 to $40 per dose for their mRNA vaccines, which require subzero temperatures during transport and storage. In contrast, the AstraZeneca-Oxford partnership has a nonprofit structure that reduces the cost to about $3 per dose, and its vaccine doesn’t require freezer temperatures.

But preliminary data from large-scale, placebo-controlled trials revealed an efficacy of only 62% for that vaccine. It uses a harmless adenovirus engineered to carry the spike gene, and scientists suspect the first shot led to an immune response to the adenovirus that compromised the impact of the booster dose.

Gamaleya’s Sputnik V vaccine uses two different adenoviruses, each ferrying the spike gene, to dodge this problem. It had 91.4% efficacy in its efficacy trial, with cases of severe disease only occurring in people who received placebo shots, the Russian institute said this week in a press release. Gamaleya and AstraZeneca also announced plans to launch an efficacy trial that combines their two vaccines and might avert immune interference. Gamaleya sells its vaccine for about $10 per dose and has made deals with a dozen countries, including populous India and Brazil.

Many countries may opt to use less protective COVID-19 vaccines that are more affordable and available instead of waiting for better, costlier shots. But even the lowest reported efficacy so far, for the AstraZeneca-Oxford vaccine, could powerfully curb COVID-19’s toll. “If you’d asked me a year ago if we had the opportunity to deliver billions of doses of a vaccine that had 60%, 70% efficacy, we would have been delighted by that prospect,” Hatchett says.

The Chinese companies developing COVID-19 vaccines remain a wild card in the supply issue. The health ministry of the United Arab Emirates last week reported 86% efficacy from an ongoing trial of Sinopharm’s vaccine, made of whole, inactivated SARS-CoV-2. The company has yet to confirm this report, but the countries testing Sinopharm’s vaccine and a similar one made by Sinovac could produce these products themselves as it is a simpler, proven technology.

Other COVID-19 vaccines on the horizon could alter the supply and demand equation. Janssen’s candidate, which is nearing the end of an efficacy trial, only requires a single dose, greatly reducing costs and simplifying delivery issues. ImmunityBio has begun an efficacy trial that tests a combination of a subcutaneous injection, which requires a much smaller dose, and an oral pill.

Countries could also speed vaccinations by more aggressively using the stock on hand. The United States will have 40 million doses of the Pfizer-BioNTech and Moderna vaccines by year’s end but has decided to hold half in reserve to guarantee everyone who received a first dose this year can get the booster 3 or 4 weeks later. “Personally, I would have immunized everyone for which I had doses,” says Kathrin Jansen, Pfizer’s head of vaccine R&D, who notes she is confident the company will deliver future doses in time for the booster shots.

As long as vaccines remain scarce, COVAX will try to ensure access for poorer countries by purchasing vaccines from companies and negotiating pricing deals for countries that will buy their own. “We always expected that it would take a little bit of time after the vaccines were licensed in the most developed economies before they could begin to flow to middle-income and lower income countries,” says Hatchett, who works with WHO to run COVAX. “Our goal was to shorten that interval to the greatest extent possible.”

Although COVAX has more than $2 billion in commitments from nearly 100 “higher income” countries, philanthropies, and companies, little of that money is cash on hand, and it says $5 billion is needed by the end of 2021. (The United States has so far not contributed to COVAX, although its advocates will lobby to change that under President-elect Joe Biden.) By February, COVAX hopes its efforts will help COVID-19 vaccines start to reach poorer countries, says Bruce Aylward, a WHO adviser. But he expects a slow start. “You want to be in the hundreds of millions by the end of the first half of the year, but even that is going to be ambitious.”

Hatchett says he expects supply and demand will “come into equilibrium” by 2022, even if there aren’t enough vaccine doses to immunize the world’s nearly 8 billion people. “At some point in 2022, vaccine will be sufficiently available that anybody who wants to be vaccinated will have been able to get vaccinated,” he predicts.