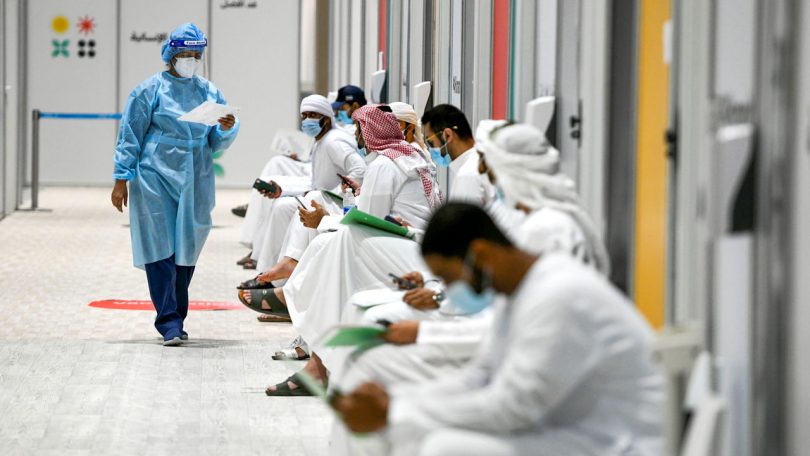 A COVID-19 vaccine made in China has outstanding efficacy data, according to a press release issued today by the United Arab Emirates (UAE), which has been testing the candidate in a study involving 31,000 people. UAE said that based on an interim analysis of data from that trial, it would formally “register,” or approve, the vaccine for widespread use. This is the fifth COVID-19 vaccine to show signs of working, and this one uses an entirely different technology from the others.

UAE’s Ministry of Health and Prevention said the vaccine, which contains a chemically inactivated version of the pandemic coronavirus and is given in two doses, had 86% efficacy “against COVID-19 infection”—a phrase that puzzled outsiders, as other vaccines have mainly been assessed for their ability to prevent symptoms. The press release further states that the vaccine completely prevented moderate and severe cases of the disease and raised “no serious safety concerns.”

Yet it offers no details beyond the efficacy claims. China National Biotec Group (CNBG), which makes the vaccine, did not reply to an email from Science and has not released its own statement. The UAE ministry and a lead investigator of the trial also did not reply to emails.

“The interim results for CNBG’s vaccine are very positive. … I just hope the results are based on rigorous analysis of the clinical trial data, and the number of infections meets the cutoff requirements as shown in the trials conducted by Western vaccinemakers,” says Yanzhong Huang, a global health specialist at both Seton Hall University and the Council on Foreign Relations.

In contrast to CNBG’s inactivated virus candidate, the four other COVID-19 vaccines that have reported efficacy data rely on the surface protein of SARS-CoV-2, the cause of the disease, to trigger immune responses. Those vaccines—none made in China—use messenger RNA that codes for the surface protein or stitch the gene for it into putatively harmless adenoviral vectors. Their developers have reported efficacies of 62% to 95% for protection against symptomatic disease. All four vaccines showed remarkable efficacy against severe disease.

If CNBG’s vaccine indeed prevented 86% of infections and 100% of symptomatic disease, it would stand out as the best efficacy data yet. But the few details of the trial’s protocol available indicate it primarily aimed to evaluate the vaccine’s ability to prevent cases of disease, not infection.

CNBG, a division of state-owned Sinopharm, has two, competitive divisions that produce vaccines using inactivated SARS-CoV-2, one based in Beijing and the other in Wuhan, China. The trial in UAE is part of a 45,000-person study that includes participants from Bahrain, Jordan, and Egypt and compares both vaccines against a placebo shot. According to the UAE press release, the efficacy claim and planned approval only refer to the vaccine made by CNBG’s Beijing Institute of Biological Products.

UAE began to use the CNBG vaccines in September outside of the clinical trial under what’s known as emergency use authorization for front-line health workers. Some government officials, including the prime minister, received it, too. CNBG efficacy trials are also underway in Peru, Argentina, and Morocco.

Because China has contained SARS-CoV-2 with its aggressive use of traditional public health measures, CNBG and other Chinese COVID-19 vaccinemakers had to go abroad to test the efficacy of their candidates. Sinovac, a Beijing-based company that also has an inactivated SARS-CoV-2 vaccine in efficacy trials in several countries, may report results from its Brazilian arm soon, Science has learned. The independent board that monitors the trial met yesterday in Brazil to review the data.