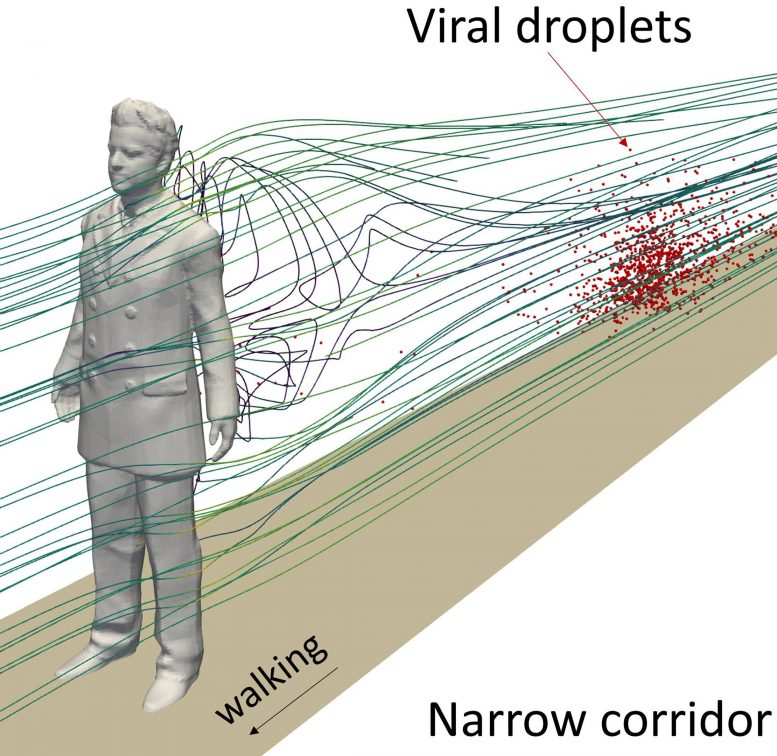 Computational simulations have been used to accurately predict airflow and droplet dispersal patterns in situations where COVID-19 might be spread. In the journal Physics of Fluids, by AIP Publishing, results show the importance of the shape of the space in modeling how virus-laden droplets move through the air.

The simulations are used to determine flow patterns behind a walking individual in spaces of different shape. The results reveal a higher transmission risk for children in some instances, such as behind quickly moving people in a long narrow hallway.

Previous investigations using this simulation technique have helped scientists understand the influence of objects, like glass barriers, windows, air conditioners, and toilets, on airflow patterns and virus spread. The previous simulations have usually assumed a large, open indoor space but have not considered the effect of nearby walls, like those that might exist in a narrow corridor.

If a person walking in a corridor coughs, their breath expels droplets that travel around and behind their body, forming a wake in the way a boat forms a wake in water as it travels. The investigation revealed the existence of a “re-circulation bubble” directly behind the person’s torso and a long wake streaming out behind them at approximately waist height.

“The flow patterns we found are strongly related to the shape of the human body,” said author Xiaolei Yang. “At 2 meters downstream, the wake is almost negligible at mouth height and leg height but is still visible at waist height.”

Once the airflow patterns were determined, the investigation modeled the dispersal of a cloud of droplets expelled from the simulated person’s mouth. The shape of the space surrounding the moving person is particularly critical for this part of the calculation.

Two types of dispersal modes were found. In one mode, the cloud of droplets detaches from the moving person and floats far behind that individual, creating a floating bubble of virus-laden droplets. In the other mode, the cloud is attached to the person’s back, trailing behind them like a tail as they move through the space.

“For the detached mode, the droplet concentration is much higher than for the attached mode, five seconds after a cough,” said Yang. “This poses a great challenge in determining a safe social distance in places like a very narrow corridor, where a person may inhale viral droplets even if the patient is far in front of him or her.”

The danger is particularly great for children, since in both modes, the cloud of droplets hovers at a distance above the ground that is about half the height of the infected person — in other words, at mouth level for children.