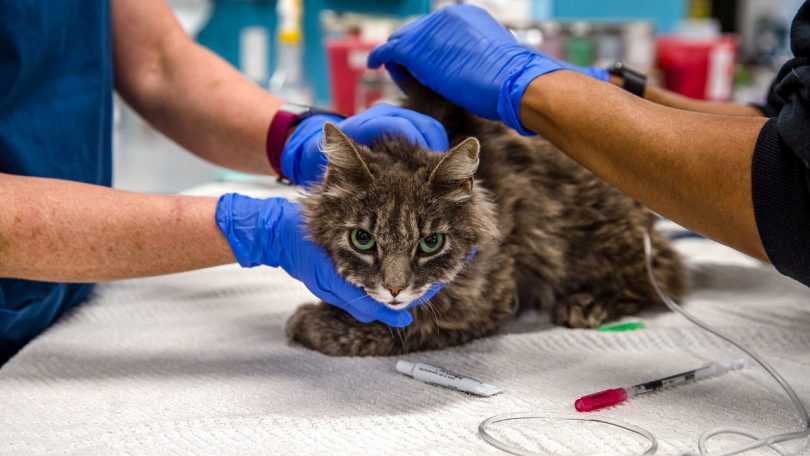 The variants of SARS-CoV-2 that keep emerging aren’t just a human problem. Two reports released this week have found the first evidence that dogs and cats can become infected by B.1.1.7, a recent variant of the pandemic coronavirus that transmits more readily between people and also appears more lethal in them. The finds mark the first time one of the several major variants of concern has been seen outside of humans.

B.1.1.7 was first identified in the United Kingdom and that’s where some of the variant-infected pets were found. The U.K. animals suffered myocarditis—an inflammation of the heart tissue that, in serious cases, can cause heart failure. But the reports offer no proof that the SARS-CoV-2 variant is responsible, nor that it’s more transmissible or dangerous in animals. “It’s an interesting hypothesis, but there’s no evidence that the virus is causing these problems,” says Scott Weese, a veterinarian at the University of Guelph’s Ontario Veterinary College who specializes in emerging infectious diseases.

Since December 2020, scientists have identified multiple variants of concern that appear more transmissible or are able to evade some immune response. B.1.351, for example, was first detected in South Africa, and a strain called P.1 was first found in Brazil. The B.1.1.7 variant drew early attention because of its rapid rise in the United Kingdom; it now comprises about 95% of all new infections there.

So far the impact of these variants on pets has been unclear. Though there have now been more than 120 million cases of COVID-19 around the world, only a handful of pets have tested positive for the original SARS-CoV-2—probably because no one is testing them. Infected pets appear to have symptoms ranging from mild to nonexistent, and infectious disease experts say companion animals are likely playing little, if any, role in spreading the coronavirus to people.

The new variants might change that equation, says Eric Leroy, a virologist at the French National Research Institute for Sustainable Development who specializes in zoonotic diseases. In one of the new studies, he and colleagues analyzed pets admitted to the cardiology unit of the Ralph Veterinary Referral Centre in the outskirts of London. The hospital had noticed a sharp uptick in the number of dogs and cats presenting with myocarditis: From December 2020 to February, the incidence of the condition jumped from 1.4% to 12.8%.

That coincided with a surge of the B.1.1.7 variant in the United Kingdom. So the team—led by veterinarian Luca Ferasin, head of the hospital’s cardiology service—looked at 11 pets: eight cats and three dogs. None of the animals had a previous history of heart disease, yet all had come down with symptoms ranging from lethargy and loss of appetite to rapid breathing and fainting. Lab tests revealed cardiac abnormalities, including irregular heartbeats and fluid in the lungs, all symptoms seen in human cases of COVID-19.

Seven of the animals got polymerase chain reaction tests, and three came back positive for SARS-CoV-2—all with the B.1.1.7 variant, team reported yesterday on the preprint server bioRxiv. SARS-CoV-2 antibody tests on four of the other animals picked up evidence that two of them had been infected with the virus. Earlier this week, researchers at Texas A&M University detected the B.1.1.7 variant in a cat and a dog from the same home in the state’s Brazos county.

The Texas owner was diagnosed with COVID-19, and owners of five of the 11 U.K. pets tested positive for SARS-CoV-2—all before their animals developed symptoms. The Texas pets showed no symptoms at the time they were tested, though they both began to sneeze several weeks later. All of the U.S. and U.K. animals have since recovered, though one of the U.K. cats relapsed and had to be euthanized.

Leroy says it’s unclear whether B.1.1.7 is more transmissible than the original strain between humans and animals, or vice versa. It’s “impossible to say” that pets infected with B.1.1.7 might play a more serious role in the pandemic, he adds, but “this hypothesis has to be seriously raised.”

Shelley Rankin, a microbiologist at the University of Pennsylvania School of Veterinary Medicine, points out that the researchers have shown only a correlation between B.1.1.7 infection and myocarditis, and that they didn’t rule out other causes for the condition. “There is no evidence pets were sick because of the virus,” she says.

Weese agrees that neither the Texas nor U.K. findings should sound any alarms about pets endangering their owners. “The risk of them being a source of infection remains very low,” he says. “If my dog has it, he probably got it from me. And I’m much more likely to infect my family and neighbors before he does.”

Still, he says scientists and veterinarians should do studies on what role, if any, SARS-CoV-2 and its variants play in myocarditis among pets. There is evidence that the virus can cause the condition in people, Weese notes, so it’s worth exploring in companion animals. “It might be real,” he says, “but there’s no reason for people to freak out right now.”