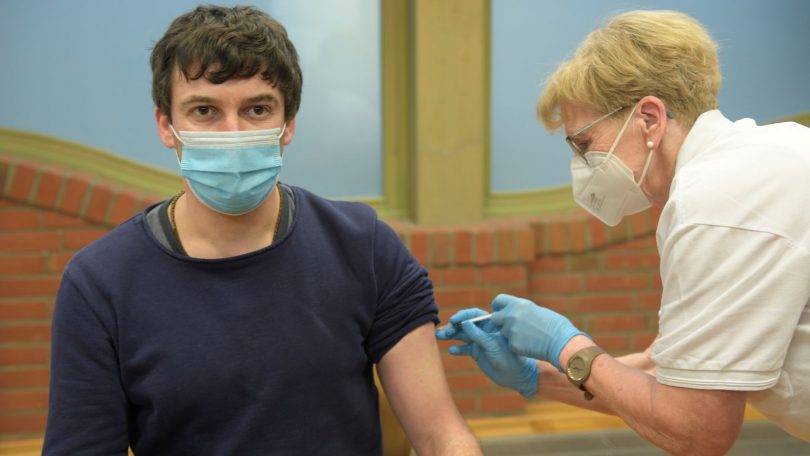 Despite the possible link, the watchdog says the overall benefits of the vaccine in preventing COVID-19 outweigh the risks.

The European medicines regulator says that “unusual blood clots” should be listed as a “very rare” side-effect of the Oxford-AstraZeneca COVID vaccine.

The European Medicines Agency (EMA) said it had come to its conclusion on the coronavirus jab after taking into consideration all available evidence.

European Union (EU) health ministers have been told the announcement would have an “immediate impact on vaccination plans” and “vaccine confidence”, according to an EU document seen by Reuters news agency.

It came as UK government advisers said Britons aged 18-29 will be offered an alternative to the Oxford-AstraZeneca vaccine where available.

The EMA has reminded healthcare professionals and people receiving the vaccine to be aware of the possibility of very rare cases of blood clots combined with low levels of blood platelets occurring within two weeks of vaccination.

It said so far, most of the cases reported have occurred in women under 60 years of age.

People who have received the vaccine should seek medical assistance immediately if they develop the following symptoms:

The EMA finding followed an in-depth review of 86 cases of blood clots – 18 of which were fatal – as of 22 March out of around 25 million people who had received the vaccine.

However, despite the possible link, the regulator said the reported combination of blood clots and low blood platelets is very rare, and the overall benefits of the vaccine in preventing COVID-19 outweigh the risks of side effects.

The Oxford jab is one of four vaccines authorised in the EU for protecting against COVID-19.

The EMA say that studies show that it is effective at preventing coronavirus and also reduces the risk of hospitalisation and deaths from COVID-19.

There have been concerns over whether the Oxford-AstraZeneca vaccine is suitable for younger age groups after reports of rare blood clots on the continent, prompting several European countries to go back-and-forth on their own vaccination strategies in recent weeks.

But ahead of the EMA’s latest briefing, France, Germany and the Netherlands had all since restricted the use of the vaccine to older people over fears that younger recipients are potentially more at risk from clots.

Earlier this week, the EMA’s head of vaccine strategy said it was “increasingly difficult” to say there is “no cause and effect relationship” between the jab and “rare cases of unusual blood clots”.

The uncertainty over the Oxford-AstraZeneca jab has been held up as one of the main reasons for Europe’s sluggish vaccination programme compared to the UK, where the shot has been widely used alongside the one from Pfizer.

Following an investigation by Britain’s drugs watchdog, fresh advice has now been issued for the deployment of the jab in the UK, which England’s deputy chief medical officer Profess Jonathan Van-Tam described as a “course correction” for the nation’s “very successful” vaccine rollout.