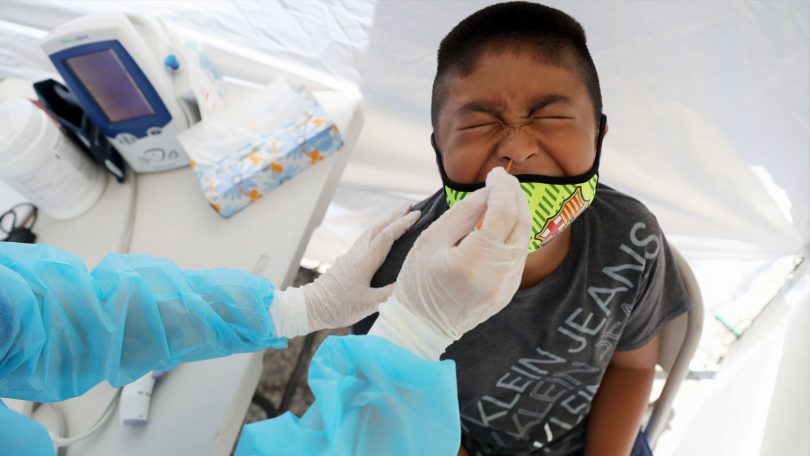 Multiple strategies, each with benefits and challenges, now exist to support in-person learning

As fall approaches, many parents and teachers hope to leave Zoom school behind and have kids return to the classroom. But the exceptionally transmissible delta variant threatens to dash these hopes as schools scramble to prepare. The U.S. Centers for Disease Control and Prevention advises that schools employ a suite of COVID-19 mitigation measures, including social distancing, masking for all students and teachers, improving air filtration and testing students regularly.

Testing, in particular, “is a way we can spend money to reduce transmission while maintaining in-person school time,” says Alyssa Bilinski, an infectious disease modeler at Brown University in Providence, R.I. “It’s a flexible tool that can be scaled up or down depending on the on-the-ground situation, and it can both stop transmission and provide real-time, school-specific information that can inform decision making.”

While some coronavirus outbreaks did occur in schools during the last school year, transmission was usually equal to or lower than community levels of the virus, especially when schools had mitigation measures in place, the CDC says. Now, as pandemic fatigue calcifies, many school districts are under pressure to remove measures like masking or social distancing or testing, even as the delta variant drives a nationwide surge in COVID-19 cases (SN: 7/27/21).

A layered approach that incorporates all of these mitigation measures is best, but with delta, “testing is going to be even more critical” in schools, says Gigi Gronvall, an immunologist at the Johns Hopkins Center for Health Security in Baltimore.

In a perfect world, all students could be tested each day with a free test that instantly revealed, with 100 percent accuracy, whether they were infected, Gronvall says. But such tests do not exist, and schools have limited budgets and bandwidths to create perfect protocols. Instead, districts will need to weigh trade-offs among different coronavirus tests, and balance frequency and scope of testing to fit schools’ needs.

Here’s a look at some of the testing strategies that schools are using and their inherent benefits and challenges.

When tests are pooled

Last February, Northborough-Southborough public schools in eastern Massachusetts started a new routine. Once a week, thousands of students (with parental consent) swabbed their noses at home, stuck the swab in a plastic baggie and brought it to school. There, swabs were pooled into groups of 16 and shipped off to a nearby lab, where technicians combined material from the swabs in each group for individual PCR tests.

Laboratory PCR, or polymerase chain reaction, tests can detect bits of coronavirus genetic material in samples, and represent the gold standard of diagnostic testing (SN: 2/23/21). A PCR test will almost never say someone without the coronavirus has it — what’s known as a false positive — but can miss infections, perhaps 10 to 20 percent of the time. Still, it’s the most accurate test currently in use, though that performance comes at the price of time and money.

Combining individual samples into pools, as Northborough-Southborough public schools did, is one cost-saving strategy. For example, if a pooled sample tested negative, the school system saved about $240 per pool each week by not having to test all 16 students individually with a $16 test. If a sample was positive, the lab then tested each swab to see who had the virus.

The strategy offers a relatively simple and cost-effective way to screen Northborough-Southborough’s approximately 4,100 students while still catching infections, says Mary Ellen Duggan, the school system’s director of health and wellness. A similar scheme will be implemented this year.

Theoretically, some pooled testing strategies can identify up to 20 times as many true positives as testing individual students, given a limited testing budget, researchers reported April 14 in Science Translational Medicine. With only so many dollars to spend, pooled testing can cover a larger population of people, catching infections that might otherwise be missed by using that same budget to only test individual swabs.

Northborough-Southborough schools had all individual swabs tested if a pool turned positive, but other schools have employed different protocols. “Some just send everyone home and say go get tested,” Gronvall says. “There’s a lot of flexibility.”

For pooled testing to work, buy-in from students is crucial. In Northborough-Southborough schools, peak participation rates were about 60 percent, on average. When students tested positive, nurses at the school would scramble to call the children and instruct them to isolate, and identify and call their contacts too, a practice known as contact tracing(SN: 4/29/20).

“To get this program up and running was a full-time job,” Duggan says, but it paid off. Overall, Northborough-Southborough schools saw very few cases, a result of the full suite of mitigation strategies that the schools employed, Duggan says.

But pooled testing has downsides. Not all schools have easy access to labs capable of running PCR tests. If administrators can have the tests run, it can still take a couple of days to get results back and then even more time to do contact tracing, ample opportunity for infected students to spread the virus. This might prove especially problematic with the delta variant, which may spread much sooner after infection (SN: 7/27/21).

For speedier information, some schools have instead opted to use rapid antigen tests, which don’t quite match a PCR test’s ability to identify only true positive cases (SN: 8/31/20), but can reveal an infection in just 15 minutes.

Almost all schools in the state tried to stay in person during the 2020–2021 school year. “In the first couple months of school, we saw a spike in case counts [among students],” says Kendra Babitz, the COVID-19 state testing director for the Utah Department of Health. That spike peaked in November, prompting all extracurricular activities to be canceled, except for the football playoffs.

“They were just about done, and we thought this would be a great place to test out testing,” Babitz says.

To compete, athletes had to present a negative test, usually an Abbott BinaxNOW rapid antigen test provided by the state, within 72 hours before a game or practice. Players with positive tests were barred from participation and instructed to isolate for 10 days, with the option of testing out of isolation after seven days. Their close contacts were told to quarantine too.

Anecdotally, this test-to-play strategy incentivized adherence to other preventive measures, like wearing masks, Babitz says. The playoffs themselves went off with few hitches, and the percentage of positive tests among players dropped from about 4 percent to about 2 percent over two weeks. Over the next several weeks, test-to-play was extended to all extracurricular activities at 127 public high schools across the state.

Off the heels of the test-to-play strategy’s success, 13 high schools adopted a similar protocol for sustaining in-person learning. Instead of sending all students home for remote learning in the early stages of an outbreak, schools that used a “test-to-stay” program would screen all consenting students with rapid antigen tests whenever COVID-19 cases spiked above 1 or 2 percent of the student body. (Some schools went further, testing students every two weeks, regardless of cases.)

Those who tested negative could stay in school — effectively testing out of remote learning — while students who tested positive had to isolate at home for 10 days. Students who opted out of the test-to-stay program were recommended, but not required, to switch to remote learning for 10 days if testing participation rates were below 60 percent, or if more than 2.5 percent of participating students tested positive.

Allowing students to test out of remote learning after an outbreak saved more than 100,000 in-person student learning days, Babitz and others reported May 28 in Morbidity and Mortality Weekly Report. Reported COVID-19 cases in the schools also declined overall after test-to-stay was implemented, though this study did not assess the impact of this intervention on transmission in schools. But a study in England found that schools where students could rapidly test out of quarantine had similar transmission rates as schools that kept students out of school during the full quarantine period, researchers reported July 25 at medRxiv.org.

Overall, the test-to-play and test-to-stay programs were “a big success,” Babitz says. All told, nearly 60,000 students were tested through both programs, and nearly 1,900, or 3.2 percent, got a positive result.

Still, while declining cases meant that the whole suite of COVID-19 mitigation measures that schools were using were working, Babitz explains, that could sometimes lead to skepticism from the community. People ask, “Is this really worth the lift if we’re not getting that many people?” she says. Participation rates in the testing programs fell as the year progressed. This fall, Babitz worries that more parents will be resistant to enrolling their children in the Utah programs, hamstringing them from the start.

Other states, including Delaware, are planning to implement similar rapid testing strategies this coming school year.

Antigen tests work by rapidly detecting proteins from the coronavirus instead of having to sequence genetic material as PCR tests do, which takes more time. That quick turnaround offers significant advantages over PCR testing. But some experts worry that the rapid tests’ higher propensity for false positives among people without symptoms could isolate some students in unnecessary quarantines.

“If you’re using a rapid test for screening, it’s important to have a confirmatory test available and available quickly so that you can get confirmation of a positive result and know whether you really need to isolate that person and quarantine their contacts,” says Andrea Ciaranello, an infectious disease physician at Massachusetts General Hospital in Boston.

Infected individuals shed virus into their stool. Once flushed, that stool flows through pipes, interweaving with the plumbing of other toilets, rooms, buildings and even neighborhoods, providing a slurry that can be sampled. Testing wastewater for coronavirus, via PCR, at different stages of the system offers a quick way to screen groups of tens to thousands of people (SN: 5/28/20).

Colorado Mesa University sampled individual dormitory’s wastewater (SN: 2/23/21), which allowed the school to detect five COVID-19 outbreaks in their early stages last year. Such surveillance testing can provide information on transmission within a community and can guide decisions about whether other mitigation measures should be scaled up or down.

“Wastewater is ideal for a residential system, where everyone is pooping into the same sewage system,” Ciaranello says. That’s not always the case in a K-12 school setting, she says, since students are there for only a few hours each day.

But there is another place that the coronavirus can accumulate: air filters. David Coil, a microbiologist at the University of California, Davis, is developing a form of surveillance testing that piggybacks off of the increased use of air filters in some schools.

“By testing air filters for viral RNA, we can see whether a virus is circulating in a classroom,” he says. It’s like the testing of pooled samples in that it covers many students in a single sample but doesn’t require wrangling parental consent forms and actual swabs from kids, he says. That wrangling becomes necessary if a classroom tests positive, of course, but surveilling air filters instead of students could help schools get a course look at transmission without the rigmarole of testing lots of students.

More creative testing measures like these may be necessary this fall, as a delta-driven COVID-19 surge collides with kids going back to school. With $10 billion in testing funding for K-12 schools through the American Rescue Plan, there’s an opportunity to scale up promising approaches, says Bilinski, the infectious disease modeler at Brown University. “At this stage of the pandemic, we have both the technology and the funding to make exposures less costly and disruptive. We should use it.”