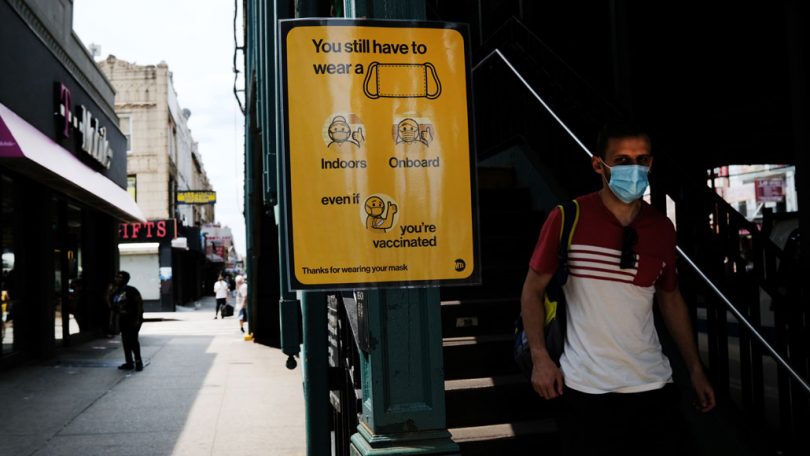 The coronavirus’s delta variant is different from earlier strains of the virus in worrying ways, health officials are discovering. And those differences may mean a return to some of the restrictions that vaccinated people thought were in the past.

The variant is not only more contagious than earlier strains, it also makes people sicker. And even vaccinated people can get infected and house similar levels of viral particles in their noses as unvaccinated people, raising concern about the vaccines’ ability to curb transmission, new data indicate. But experts caution that there’s more to infectiousness than just those viral levels in the nose.

Here are five things to know about the new delta data:

1. Vaccinated people can get infected with delta, but the vaccines are still working.

Some 350 of about 470 people, nearly 75 percent, who caught the coronavirus in a large outbreak in Barnstable County, Mass., were fully vaccinated, researchers report July 30 in Morbidity and Mortality Weekly Report. Public health officials linked many of those cases to packed indoor and outdoor events at places like bars and rental homes. The delta variant, which was first identified in India, was behind 120 of 133 analyzed COVID-19 cases, or 90 percent, in the outbreak.

But while it may sound like the vaccines didn’t do their job, the high proportion of cases in vaccinated people may be because of the county’s high vaccination rate, the researchers say; as of July 3, 70 percent of those eligible in Barnstable County are vaccinated. As more people in a community get vaccinated, the likelihood that someone who tests positive for the coronavirus has protection from the shots also goes up. That’s simply because the vaccines aren’t 100 percent effective.

Crucially, COVID-19 shots still protected vaccinated people from severe disease. While five people were hospitalized, including one unvaccinated person, as of July 27, no one had died.

2. Vaccinated people might more readily transmit delta to others, but there’s a huge caveat to that.

In that Massachusetts study, both unvaccinated and vaccinated people infected with the delta variant had similar levels of coronavirus genetic material in their noses, as measured by PCR, suggesting similar viral loads.Those elevated viral loads could mean that vaccinated people might more readily transmit delta than other coronavirus variants, despite being protected from the worst of COVID-19 themselves.

But this finding comes with major caveats. The result “just gives you an indication of how much viral RNA is in the sample, it tells you nothing about infectiousness,” says Susan Butler-Wu, a clinical microbiologist at the University of Southern California. These data “are a cause for concern, but this is not a definitive answer on transmissibility” from vaccinated people, she says.

When a vaccinated person gets infected and becomes symptomatic, “we already knew that they’d have higher viral loads,” Butler-Wu says. But the immune response jump-started by the vaccine may hamstring many of those viral particles.

Three recent studies in Canada, Singapore and Scotland indicate that the variant raises the risk of hospitalization, intensive care unit admissions and death.

In Canada, epidemiologist Ashleigh Tuite at the Dalla Lana School of Public Health at the University of Toronto analyzed data from the province of Ontario to see if different coronavirus variants made people sicker. She and colleague David Fisman had information about who got infected and what the outcome of the infection was. Even after accounting for vaccination, age and underlying health conditions, the delta variant carried a 120 percent increased risk of hospitalization, 287 percent increased risk of ICU admission and 137 percent increased risk of death, the researchers report July 12 at medRxiv.org. “And that’s on top of what we see with alpha,” Tuite says.

In Singapore, a preliminary study in the Lancet posted June 7 to the preprint server SSRN found that the delta variant nearly doubles the risk of pneumonia compared with earlier strains and carries an increased risk of needing supplemental oxygen, being admitted to the ICU and dying.

Those preliminary data haven’t been reviewed by other scientists yet, but agree with data published in the Lancet June 14 from a study in Scotland. There, researchers found that the delta variant doubles the risk of hospitalization compared with the alpha variant.

There is evidence that the vaccines work slightly less well against the delta variant than they did against earlier strains. Still, vaccination reduces the risk of these serious complications. Vaccines are like using an extinguisher on a kitchen fire, says Paul Offit, director of vaccine education at the Children’s Hospital of Philadelphia. “The goal is to keep the rest of the house from burning down.” The virus can enter cells in the nose, throat and lungs and start to replicate there, “so you can have an asymptomatic infection or a mild disease,” Offit says.

But then, a vaccinated person’s immune system will kick in after a couple of days and prevent the infection from causing more severe disease, he says. “It’s easier to prevent moderate to severe disease than it is to prevent mild disease.”

4. Delta is much more transmissible than previous forms of the coronavirus.

An unvaccinated person infected with the ancestral version of the virus that first emerged at the end of 2019 typically transmitted the virus to two to four people on average.

Someone infected with the delta variant, however, might pass the virus on to five to 10 others on average. That’s nearly on par with the contagiousness of chicken pox, internal CDC documents first obtained and published by the Washington Post show.

The CDC recommended a return to masking, because it is one of the most effective tools to prevent infection.

N95 masks are effective in all settings, but surgical masks fare best when the concentration of viruses in the air is low, an international group of researchers calculated in a June 25 Science study. And their calculations suggest the masks work best against both getting an infection and spreading it when everyone is wearing a mask. And well-fitting masks protect better than ones that have gaps at the top or sides, previous studies have demonstrated (SN: 2/12/21).

Researchers tested how many stand-ins for virus-carrying aerosol particles mannequin heads “breathed” with and without cotton masks. If all the dummies wore masks, the combined concentration of aerosol particles in the air was 72 percent lower than the number of airborne particles when none of the mannequins were masked.

Combining masks with proper ventilation and filtration may be even more helpful (SN: 5/18/21). In the mannequin study, researchers also placed two HEPA filters in various locations around the room. HEPA filtration cut exposure to airborne particles by 65 percent compared with no filtration and no masks. When all the mannequins were masked and the HEPA filters were on, the average particle concentration was reduced 90 percent.